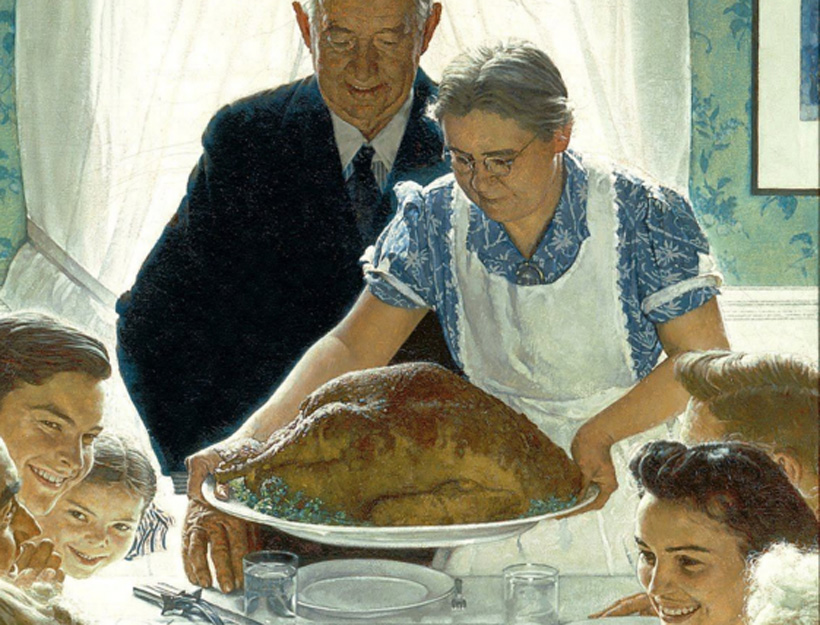 Culture Honey offers our most heartfelt wishes and prayers for a meaningful and peaceful Thanksgiving celebration to all of our American readers!  We are thankful for your readership!

As we are in a particular season of mindful thankfulness, we’d like to call attention to the classic Norman Rockwell image above and the few below. Norman Rockwell was a 20th century American painter and illustrator. His works have enjoyed a broad popular appeal in the U.S. for their reflection of American culture. The piece above is so commonly linked with American Thanksgiving that it has inspired many modern spin-offs and even parodies. In fact, the actual name and thinking behind the piece is much larger than the American holiday. “Freedom from Want” (above) is part of a series of value-statements and ideals that were developed by President Franklin D. Roosevelt prior to the U.S. involvement in World War II.

On January 6, 1941, Franklin D. Roosevelt gave a State of the Union address that outlined Four Freedoms which he identified as essential human rights that should be universally protected. These ideals not only inspired the paintings by Norman Rockwell included here, but also became a part of the foundation for what what would later become the United Nations. At the time of the speech, not all American citizens were experiencing the ideals represented, but more on that and the evolution of Norman Rockwell further on.

Here is a quote from the speech, which is now referred to as the “Four Freedoms” speech. In the address, Roosevelt critiqued isolationism, saying: “No realistic American can expect from a dictator’s peace international generosity, or return of true independence, or world disarmament, or freedom of expression, or freedom of religion– or even good business. Such a peace would bring no security for us or for our neighbors. Those, who would give up essential liberty to purchase a little temporary safety, deserve neither liberty nor safety.”

Even as Roosevelt was laying out a case for the U.S. entering into World War II, we can see that his words ring true today beyond the merit of that immediate cause. For if the values of freedom were so much to be espoused and acted upon at that time, then what about in today’s further interdependent world? There were many problems in America during the same era that these words were first spoken – minorities were treated unjustly and Japanese Americans were even sent to interment camps. But if we examine the ideals today in our context as ideals to work toward, to aspire to, then the Four Freedoms are not a call to war or military intervention in this time, but actually a call for America to remember who we are as our better selves!

There are many important issues facing the United States and the world as this piece is being written. Can we and should we be thankful in the midst of the many serious and sometimes terrible facts that we are faced with today? Yes, we should, always “giving thanks with a grateful heart”. However, as our nation pauses to reflect on thankfulness, Culture Honey would like to propose a few other areas of thought to consider. 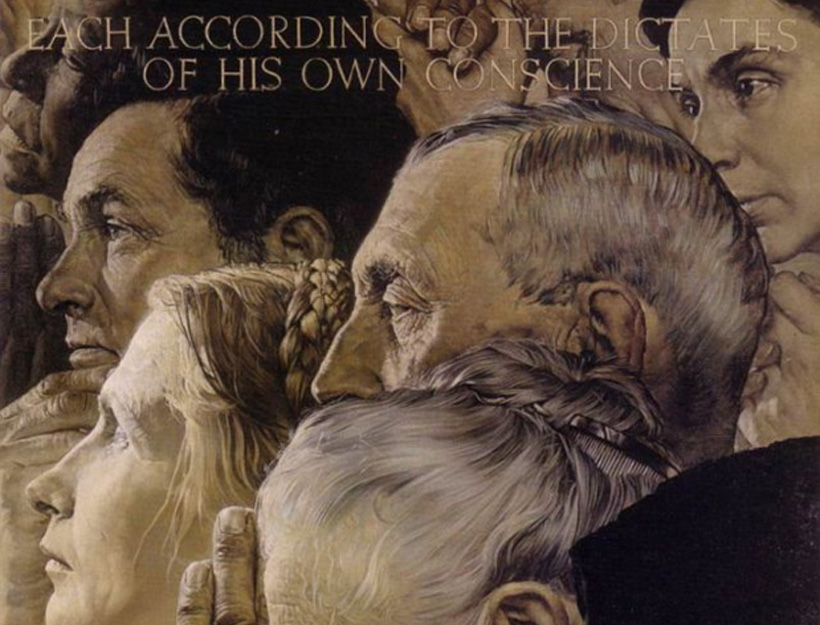 FREEDOM OF WORSHIP (for ALL people!)

Freedom of worship, “each according to the dictates of his own conscience,” means that deeply held faith is honored in society and no group is persecuted as less legitimate than another.  It means that the universal freedom to practice one’s religion and faith without interference by the government is guaranteed. This is an American ideal!  This is a human rights ideal! Remember the yellow stars in Europe in the 40’s – a terrible, terrible example and warning of power and government using religion to persecute a particular group which that power and government did not value. 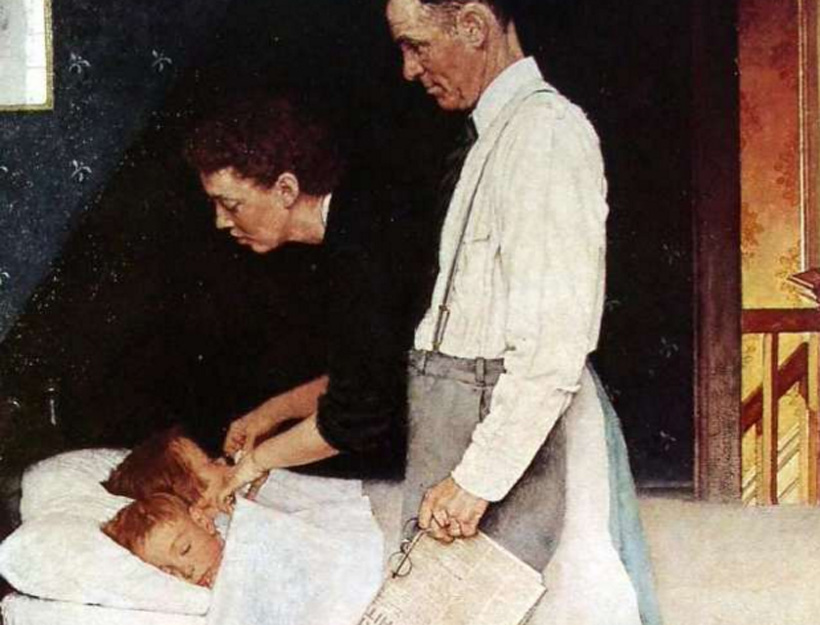 This value strives for a gentle society, one not entangled in constant war and violence or political and social injustice – no “knocks on the door” or worse, invading the peaceful sanctuary of family.  Would we extend this universal freedom to those fleeing war and violence or poverty and political corruption?  When we as a nation are considering dropping bombs as a response, how does that hold up the value of Freedom from Fear? Culture Honey author Julie Clark wrote a brilliant piece on this last year called “Booties on the Ground and Throwing Books Not Bombs”. We highly recommend reading it and passing it along to others to read as well!  What about those that are seeking income, who are working for wages to care for their family, but may not have the paperwork in place required by government agencies?  Do they deserve the human right of Freedom from Fear? 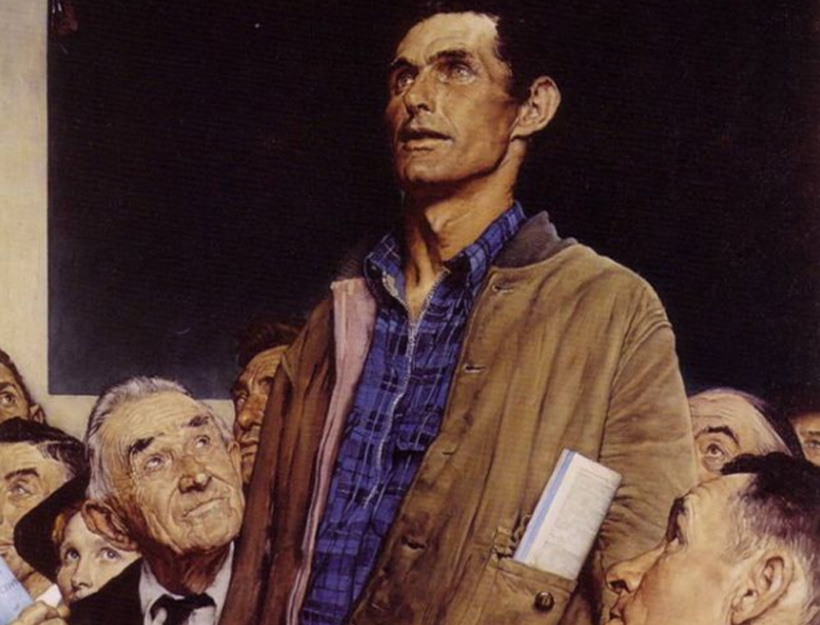 Freedom of speech, the ability to question and criticize our government, is allowed and encouraged. The public is able to highlight inconsistencies in law or mistreatment of minorities – such as what Dr. Martin Luther King fought for during the Civil Rights area.  How are those that protest against the government or it’s decisions have a right to be treated?

As the 60’s moved forward, Norman Rockwell felt he needed more creative freedom of expression than the Saturday Evening Post could offer, so he left his position there for Look magazine in 1963. It is interesting and even inspiring to see his progression as a person through his decisions and the art he produced as he led his life. The first image he painted in his new position is the one in the video below, which hung for a time in the White House just outside the Oval Office. President, Barack Obama, hung the painting, “The Problem We All Have”, there in 2011, and shared a special moment with Ruby Bridges, the little girl featured in the painting (and in the video) below.

So as we consider this Thanksgiving holiday, it is our hope that we would continue to be open to progress in our thinking even as we see Norman Rockwell was able to do in his life and through his painting. The ideals of “Freedom from Want”, “Freedom of Religion”, “Freedom from Fear” and “Freedom of Speech” are timeless values that should be granted to all people everywhere in every era. This is a call to our American better selves; it is a call to our shared humanity with the world at large. Let us aspire to these and other ideals that call us to thankfulness, thoughtfulness, humility, generosity and kindness.
*