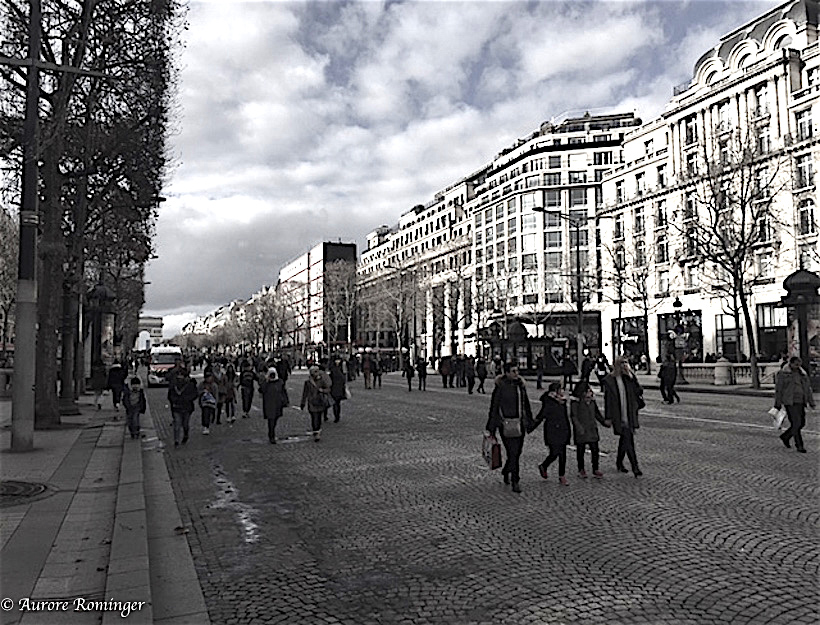 Who was Jefferson in Paris?

Virginia-born Thomas Jefferson (1743 – 1826) was the principal author of the Declaration of Independence (1776) and the Statute of Virginia for Religious Freedom (1777). He was a believer in deism, which advocates a “natural religion” (i.e. individual experience that does not rest on a written tradition). For some deists, it is an individual and irreligious belief in that the practice is a direct, contemplative relationship with God. Jefferson believed in education, and he founded the University of Virginia (1819) and educated his slaves in trades. He was minister to France (1785 –1789) before becoming U.S. Secretary of State, then the third President of the United States (1801–1809).

Through the lens of history it is easy to see how significantly prevailing beliefs and practices ‘colour a people’ and define their practices. The Declaration of Independence and historical reflection offer a reminder for us to focus on what is wanted. These days, evidenced by history, Jefferson likely would have supported that which people generally are expressing, even as it was, that he clearly lived by the norms of his day. 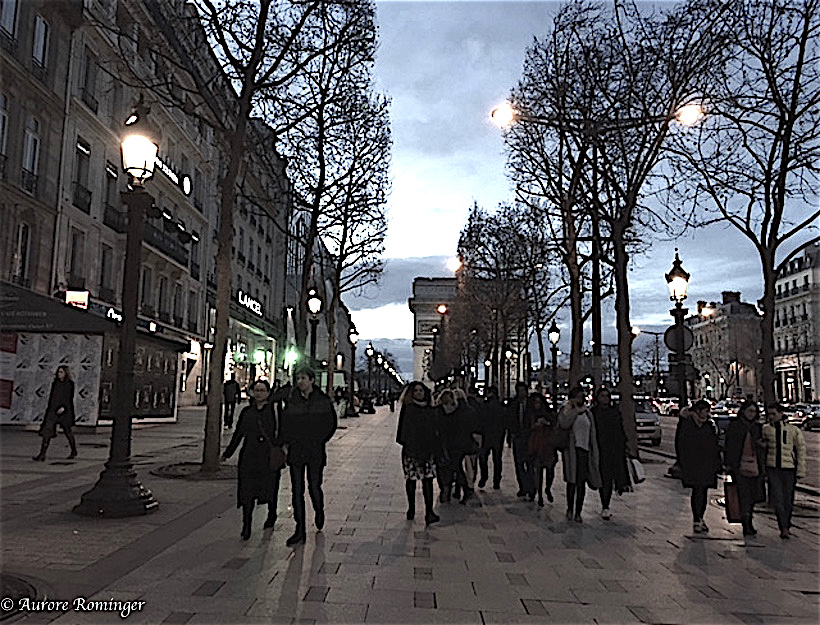 Evening falls as walkers occupy the sidewalks and vehicles return to their roles, contributing to the generally nonstop traffic circulation on the Champs-Elysée in Paris.

Michael Kenna, acclaimed for his work on French landscape and gardens, photographed Jefferson’s footsteps in Paris. Arion Press offers this series of forty-six black-and-white photographs adding a fresh visual record to this fascinating chapter in French and American history. In addition to noted landmarks such as the Pont Royal, Louvre, and Palais Royal, Kenna found forgotten Jefferson sites, such as his daughters’ convent school, the gardens of the Hôtel de Salm, and the interiors of the Mint.

Thomas Jefferson is America’s most famous francophile. He lived in Paris from 1784 to 1789. He delighted in learning to cultivate and to savor that ”joie de vivre” – good food, good wine, good company. ”Here we have singing, dancing, laugh, and merriment,” he wrote to Abigail Adams in 1786.

Jefferson was a strong believer in freedom, and a self-styled ”savage from Virginia”. He arrived a widower in France with his slave James Hemings and his daughter, Martha (Patsy), aged 12 years. Jefferson left his two younger daughters in the care of friends in the U.S.. After Lucy died in 1787, Jefferson sent for his surviving daughter, nine-year-old Maria (Polly). The teenage (14 years) slave Sally Hemings accompanied Polly to France.

Jefferson, a widower, had a momentous love affair with Maria Cosway, the beautiful wife of an English painter in ‘the city of light and love’. Walking along the Seine with her on Sept. 18, 1786, Jefferson tried to jump over a fence – ”whether to retrieve a blowing scarf in the wind or simply in sheer exuberant good spirits one can only guess,” but fell and apparently dislocated his right wrist. Even after Mrs. Cosway returned to England in October of 1786, they continued to write nearly until his death.

Sally and James Hemings were two of his slaves who were not slaves in France. Slavery had been illegal in metropolitan France since 1315, and thus any slave would be freed de facto by being in the country! As Jefferson’s slaves in France were paid a nominal fee – albeit much less than French service providers – they were therefore not slaves. James Hemings used his salary of 2 dollars 50 per week to study French.  When Jefferson left Paris in 1789, Sally Hemings was pregnant. Sally chose to return with Jefferson to the U.S. and allegedly bore six Jefferson children, four of whom survived. Sally was not freed in Jefferson’s will, nor was she sold at the auction of the estate as others were. Jefferson’s daughter Martha ‘gave her her time,’ and after Jefferson’s death Sally lived with two of her sons in Charlottesville.

As ambassador of the young American republic, Jefferson witnessed the last years of Louis XVI’s monarchy and the turbulent opening moments of the French Revolution. As revolutionary fervor rose toward the storming of the Bastille in 1789, Jefferson became an ardent supporter of the French Revolution, allowing his residence to be used as a meeting place for the rebels led by Lafayette. 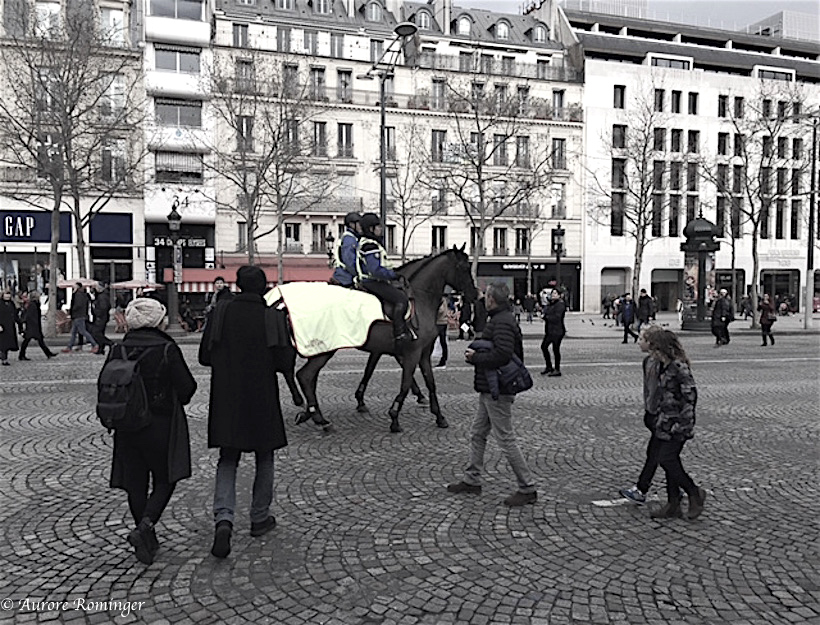 Joining the walkers on the Champs-Elysée are the magnificent horses of the French Republican Guard today.

Due to his enthusiasm for the people and the land of France, coupled with initial difficulties of navigating the country with his school-learned French, Jefferson thought to  assist other American travelers. He authored a rudimentary guidebook, ”Hints to Americans Travelling in Europe.”

In February of 1787, as the dislocation of his wrist was slow to heal, Jefferson’s doctor recommended that he go to Aix-en-Provence to soak it in the renowned thermal waters. Jefferson then commenced on what became a three-month journey. He described his travels a journey into ”the land of corn, wine, oil and sunshine.” He visited Orange, Nimes, Arles, Aix (wherin reportedly the waters didn’t help), Marseilles and Nice. He spent three brief weeks in Italy. He returned to Aix and then visited Les Baux, St. Remy and Avignon. He took a trip through the Canal du Midi to Toulouse, and then back to Paris via Bordeaux and the Loire Valley. He was enchanted. According to ”Thomas Jefferson’s Journey to the South of France”, Jefferson kept extensive notes of this trip, with observations on everything from Roman antiquities to the price of dung.

When he chose to begin his three-month journey in the vine-covered slopes of Burgundy, Jefferson’s daughter, Martha, teased him in a letter, commenting, “I am inclined to think that your voyage is rather for your pleasure than for your health,” In fact, Jefferson’s five-day visit to the Côte d’Or — a region famous for its extraordinary terroir — was not accidental. After spending more than two years in Paris establishing diplomatic relations with the court of Louis XVI, Jefferson, a lifelong oenophile, had tasted his share of remarkable vintages. Now he was keen to discover the vineyards and cellars of Burgundy, and to study firsthand a winemaking tradition that stretched back to the 11th century.

Turning his thoughts back to France at the end of his life, Thomas Jefferson wrote of its ‘preeminence of character among the nations of the earth.’‘
*