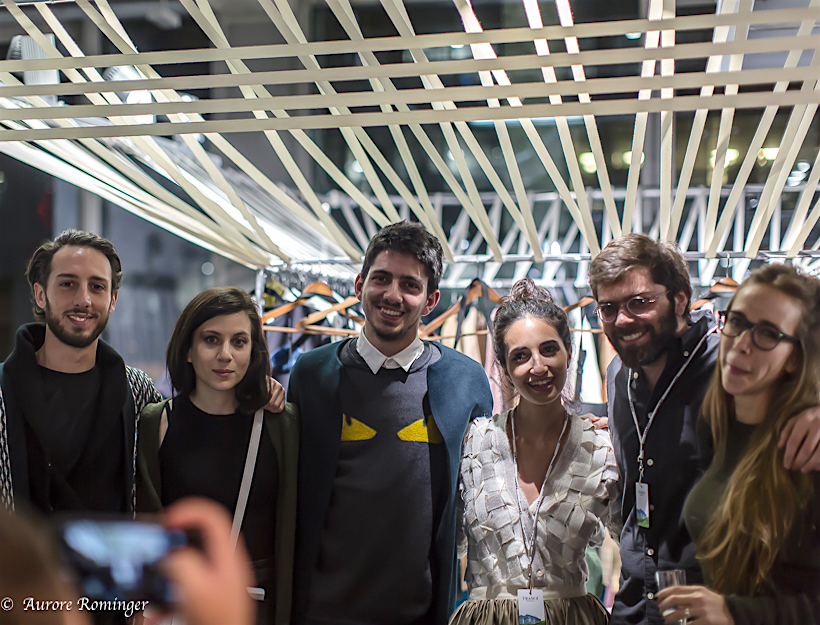 Starch Foundation crew, including the designers, founder and designing architect for the installation. ‘Starch’ is pure, odorless, with molecular structure that holds form and lasts.

The annual program hosts a rotation of debut collections from four to six young designers. During the year, the collections are presented at the Starch Boutique in Saifi Village in downtown Beirut. Within the program, each designer is guided to develop his or her collection, and is supported with assistance in cultivating skills in communication, marketing, branding and public relations. Design related workshops, seminars and collaborations are included in the programme. This year, participating in Starch Foundation Programme, are Bashar Assaf, Eliemetni, Exocet, La Terre est Folle, (Joe Arida), and Nour Najem.

In speaking with three designers, I learned that Bashar (center) also works with the Starch Foundation. His garments tend to accentuate the female body with sophisticated yet demure silhouettes, solid colors and clean cuts. His oversize collection this year includes subtle stitching to remind us to acknowledge the human body. In 2012, he was chosen as one of the Starch Foundation’s designers, where he produced three collections, “Metamorphism”, “Open Heart” and “Hallucinations”. The latter two were showcased at Fashion Forward in Dubai. He was also nominated by Elle Style Awards for “Best Upcoming Fashion Designer in the Middle East” that year. 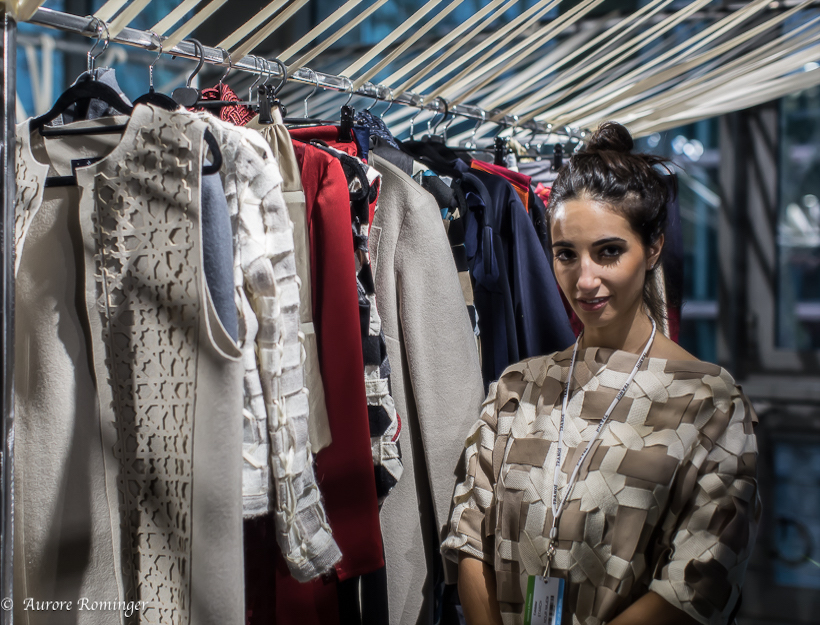 Nour explains to me that while she dreamt of entering the world as a fashion designer, and has interned with Elie Saab, Rabih Kayrouz and Caroline Seikaly, she hesitated, feeling a value-added, soul-full component was missing. In 2014, Nour launched the Kenzah Foundation in parallel to her luxury fashion brand. Through this NGO, she works with talented artisans using overlooked craftsmanship with the hope of empowering women who come from underprivileged backgrounds. Nour is commited to having a sustainable, reliable and responsible company, and this engagement is part of the brands’ codes. 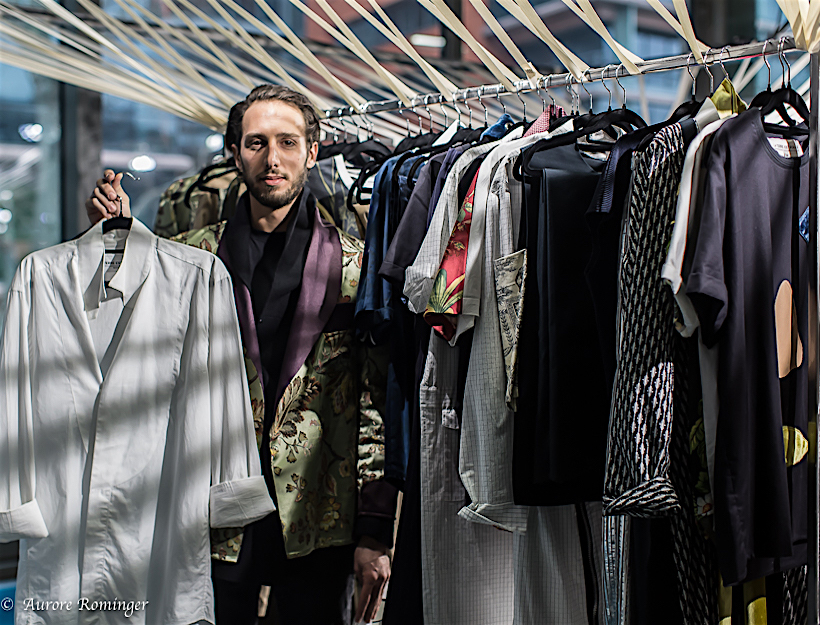 La Terre est Folle (The World is Mad) is a distinctively designed body of eclectic products, including furniture, objects and clothing. Joe tells that his principal inspiration is influenced by his grandparents. The colours and patterns he finds in and around his grandparents’ home are reflected in his designs. He exhibits an expansive, playful and joy-filled spirit. He likes to imagine how his grandfather would be as a young man these days, and then is inspired to create his imagined spirit in clothing. His designs remind me of colours and patterns of exotic palms and florals, akin to the colour and form one might feel comfortable wearing in the Hawaiian Islands or Southern California. Indeed he dreams to visit and have his designs be appreciated in California.

Above, Yasmine Jaber (not present) presents a line of hybrid hand-bags appealing as much to craftsmanship as to 3D printing. She and her colleague, Morning Lau from Hong Kong, merge their two cultures and their shared love for nature and animals. Exocet is a union between fashion and technology, mixing traditional savoir-faire in working with leather goods and an avant-garde technique, 3D printing. The name EXOCET signifies a flying fish. The symbol reflects inspiration from the mythical Metis of ancient wisdom and deep thought, and lends unbridled freedom to the spirit of the brand. The aesthetic representation emphasizes the great role that technology plays today, and reminds us that as technology invades our lives we start to lose our animal spirit.

Elie Metni (second from right) is the architect of the Starch Foundation installation. Elie studied architecture at the Académie Libanaise des Beaux-Arts (ALBA) where he is also a part time instructor, and he interned for a year in Switzerland where he participated in the design of various projects. Elie constantly explores a project’s conceptualization by experimenting with materials and ergonomics. He believes that a project doesn’t end at the completion of its construction, but continues as the user starts interacting with the product. He co-designed the Orient Express, a café bar in Beirut that has been open to the public since 2014.

It was a joy to meet these inspired, creative and devoted young designers participating in the Starch Foundation programme, and to learn of this organizational format that serves to incubate young talents. Thank you, Tranoï. À mon avis – in my opinion – exposure to people and places otherwise unknown inspires and illuminates life in general. I think these are (some of) the people here to do that. It feels like there is a functional spirit of devotion involved in the self-development of the emerging designers that includes consciousness of past and awareness of the future. This combination encompasses awareness of civility in society, and in turn that ignites and sparks the same to the world in general.
*