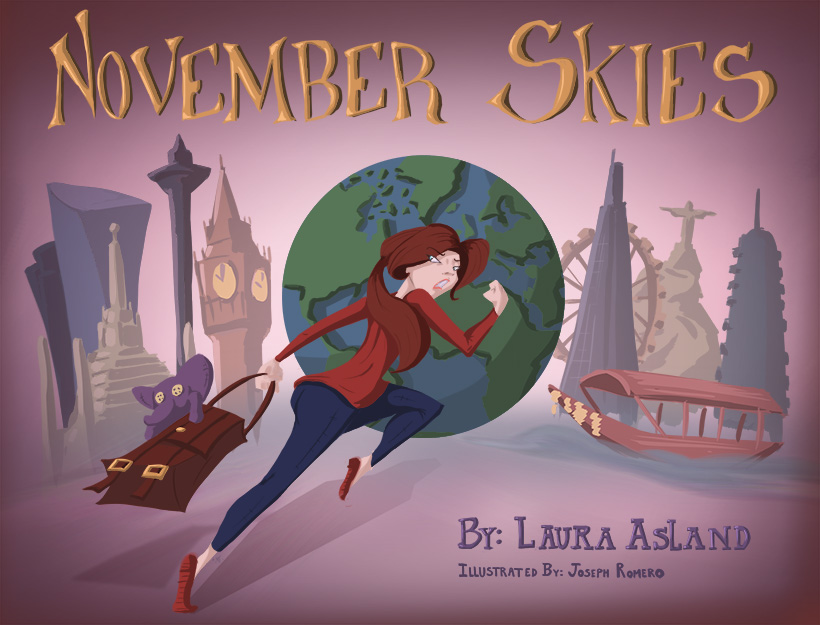 Kaila seems to have everything she could ever want in life… everything that is, except her father. Jeffrey Oliver, the famous environmental journalist, disappeared while on assignment over 20 years ago. Now a new journalist has come onto the scene under the pen name November Skies. Could it be Kaila’s long lost father?

Culture Honey is proud to announce the debut of our first original fictional series, November Skies! Penned by Culture Honey Contributor and Assistant Editor, Laura Aasland, and featuring original graphic illustration by Joseph Romero, November Skies follows twenty-one year old Kaila Oliver as she begins what quickly unfolds to be the adventure of her lifetime!

Culture Honey is pleased that one chapter of the original story will appear on the first Tuesday of each month! Signing up for our weekly “Pure Culture Honey Update” will make sure you are reminded of the next November Skies issue as well as all the other great articles that appear in that edition of Culture Honey!

And now, without further ado!

Kaila Oliver awoke to the sounds of her younger siblings fighting over their new toys. She could hear her little sister Clarissa’s voice rise shrilly.

“Mom’s not here right now, so there’s no one to run crying to!”

Kaila groaned and reached for her cellphone to check the time. It was almost 11. She should probably get up. Bleary eyed, she trudged into her bathroom to brush her teeth. She could still hear her siblings arguing through the walls.

Robert, Kaila’s stepfather, could be heard from the kitchen, his voice calm as always. “Now kids, I bought you that game so you two could play together, not so you’d fight.”

Kaila smirked in the mirror. Kids always fought over stuff when it wasn’t clearly divided, even sometimes when it was. That was the way of the world. She looked toward the shower, wondering if she was willing to jump in yet. The heated tiles were warm against her feet. California might be warm most of the time, but the winter mornings were chilly. This January had been particularly brisk.

She’d have to take a shower sooner or later. Might as well be now. Turning her phone to Spotify, Kaila plugged in her portable speaker and let her morning playlist run. The water was plenty warm, so at least it wasn’t too big of a shock to jump in. As she applied a liberal amount of shampoo to her head, Kaila wondered how long this red dye would stay in her hair. She and Marcia had tried it out on a whim last week just to spice things up from her usual brown, but she didn’t feel like the look really suited her. Maybe some simple highlights would’ve been better…

As Kaila stood in the kitchen in her fluffy bathrobe, pouring herself a cup of coffee, she could hear her mother entering the front door.

“I’m back from Women’s Club! Did anyone miss me?”

Kaila’s grip on her mug tightened.

Clarissa and Robby didn’t respond, as they were fully engrossed in their video game now that things had settled down.

“Aileen? Have you seen my blue tie anywhere?” Robert called from the master bedroom.

“I put it on the armchair last night. Do you see it?”

“Honey, did you just get up? It’s almost noon!”

“Well, it’s not like you’ve been getting up much earlier on other days.”

Kaila could hear her mother coming into the kitchen.

“Have you heard back from USC yet on what the deadline is for reapplying? Or looked at any other schools?”

“Well, Robert’s going into work for a few hours, and I’ll be dropping Robby and Clarissa off for a play-date at Tommy’s house, then meeting with Mrs. Garcia, so you should have the house to yourself for a few hours.”

Kaila nodded. She was on her phone. In one hand she poured milk onto her cereal, while in the other she scrolled through her newsfeed. “That gas leak in Porter Ranch still hasn’t been fixed.”

Kaila looked up to see if her mother was going to say anything else, but she appeared engrossed in today’s newspaper. Kaila decided to try again.“Is Grandpa coming by today?”

That got her mother’s attention. She placed the newspaper down and turned straight to Kaila. “Yes, he is, and I hope you’re more polite to him than you were last time. Honestly, he gets enough complaints from perfect strangers, he doesn’t need to be attacked by his own family.”

“So then it’s not his fault that a huge oil spill happened last week on one of his company’s oil freighters?”

“Oh, stop acting so high and mighty, Kaila! Honestly, you’ve never given two hoots about the environment, and now you seem to take every chance you can to throw a jibe at your grandfather. What has gotten into you? Do you really have no better way to spend your time?”

“Dad wasn’t scared to tell Grandpa what he thought of him!” Kaila snapped.

Aileen’s expression changed, to one of sadness.“It’s true, your father was proud of sticking up for what he believed in, but he wasn’t very good at handling responsibility. I want you to grow into a woman who can stand accountable for herself, and be proud of what she’s accomplished.”

“Why, so I can marry someone like Robert? So I can become a happy housewife like you?”

There was a moment of stunned silence, then Aileen’s face hardened. “What in the world is wrong with you? You never acted like this before! Why are you so angry all the time?”

“Because sometimes I wonder if I would have been happier with Dad!” Kaila’s throat felt tight at these words. Her back was turned to her mother. She flinched when she felt a hand come to rest on her shoulder.

“Honey, as far as we know, your father is dead. He’s been gone for over twenty years now. If he were still alive-”

“… Then Grandpa would know about it. You’ve told me as much before. I’m eating in my room.” Kaila shook off her mother’s hand and strode angrily down the hall, slamming her door behind her. The cereal had already gotten soggy. Kaila stepped into the bathroom and flushed it down the toilet. Sitting down on her bed, she reached for her laptop, which was buried under a pile of pillows. It was almost noon. November Skies would be posting soon….
*