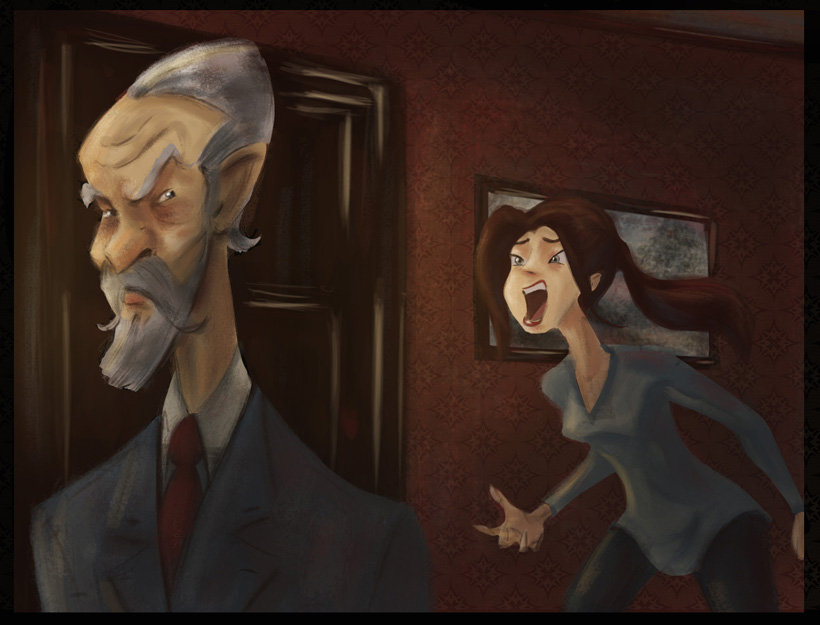 It was a long, tiring trip home. Given the suddenness of her capture and the fact that her grandfather’s bodyguards confiscated her phone on the way to the airport, Kaila had nothing to occupy herself besides her own worried thoughts. The fact that her grandfather had her followed throughout all of her travels made Kaila furious. She was upset at the invasion of privacy, but even more than that she was angry with herself for not noticing sooner. How had she not realized there was a tail on her for three whole weeks? She had been a fool to think her grandfather had believed her story. She should have had her eyes out for ways he could be keeping track of her. But she hadn’t been thinking about any such danger, and now she was going back to face the wrath of Eamon Arthur.
She certainly wasn’t looking forward to seeing her mother either, not under these circumstances. No one who was waiting for her back at home would be glad to see her now. Even Phoebe might still be ticked off at the stunts she’d pulled. It was too stressful to just sit there stewing in her own gloomy thoughts, so Kaila tried to pass most of her time on the three flights home sleeping. It was impossible to get comfortable though, and since the thoughts never left her, Kaila found herself in an exhausted stupor for most of the travel time.

Dear Kaila,
When you didn’t come back after a couple of hours, I assumed the worst. I asked around and was eventually able to find someone who saw a white girl getting pulled into a limousine that morning. The simplest explanation for this is that your grandfather found you, even though you said he had no idea where you were. If you are able to reply to this email and confirm my suspicions, that would be appreciated. I sent your draft on the Qatar labor camps onto November Skies as I figured you would be unable to do so. It’s promising stuff. I believe he will approve.
As for me, I am going to be visiting my aunt who lives in the Mediterranean. I don’t expect to be back in Qatar for some time.

I hope that all is well with you.

Ulima was safe. That was the most disconcerting thing her grandfather had been able to hold over her, although Kaila was sure it wasn’t his last. Now to see if there was any news on November Skies. Her argument with her mother might have placed her in doubt as to how much her father would want a daughter, but the fact remained that November Skies respected her as a fellow journalist. If she told him she had more dirt on Eamon Industries, he would listen. This was too sensitive of a topic to go into detail on over an email. To really be of use to November Skies in his fight against Eamon Industries, she would need to do what she had originally planned: meet him in person. Kaila typed up a quick email.

Due to unforeseen circumstances, I too had to suddenly leave Qatar. However, I hope that this will not prevent us from being able to meet in the near future. I have further information on Eamon Industries that is quite sensitive. I believe it would be best for us to meet in person.

Was the message deceptive? All she really had to offer up was her own personal connection to Eamon Industries. Still, it would have to do for now. She was not going to back down.

The final email to write was to Phoebe. Kaila kept it short, as the bulk of what she needed to say she hoped to able to divulge in person.

As you predicted, my plans fell apart and now I’m in trouble. Like, a TON of trouble. However, if you’d be willing, I could use your help one last time. You up for it? If so, drop by the house. I figure my mom will have enough mercy on me to allow one visitor.

Phoebe came and visited the next day. Needless to say she was hesitant at the viability of Kaila’s plan. At best it would put her a couple hours ahead of her grandfather once he got onto her trail. It would be enough time to meet November Skies though, and that was all Kaila needed. After healing the whole story of what had gone down over the past few days and sharing tears as best friends are wont to do, Phoebe was committed. As she dried her eyes, Phoebe asked:
“So, where will you be going on this last wild ride?”
Kaila showed her November Skies’ response to her last email:

A few days later, Kaila waited by her kitchen door. Her mother and Robert were at work. Robby and Clarissa were at school. She had been keeping track of the guards’ perimeter sweeps these last few days, and had found a two minute interval when neither was in the backyard. It wasn’t much, but it would have to do. It would give her enough time to reach the bushes on the edge of their lawn, and from there she hoped that her neighbor Mrs. Harmelink’s shrubbery menagerie would provide enough cover for her to get a block down the street to where Phoebe was waiting.
It was 1:37. Kaila opened the door and walked calmly toward the edge of her yard. Running would be too noisy and draw attention. She had to remain calm. She reached the foliage safely, and a block down the street found Phoebe waiting. They drove silently for a while, then Phoebe spoke.
“This is really the last time, huh? The last hurrah?”
“Yeah, there’s no way I’m escaping after this,”

They stopped at a local pawn shop in Pasadena first. Kaila had several pieces of jewelry her grandfather had given her over the years. It seemed only fitting that these should be used to fund her airplane ticket. Then it was off to LAX. Kaila paid for her ticket in cash. Before the TSA checkpoint, Kaila turned to give Phoebe one last hug.
“Thank you for all your help. I couldn’t have done this without you,”
“Hey, it’s worth it for all the crazy stories we’ll have to tell after this,” Phoebe chuckled. Then her tone grew more serious. “I hope you finally find what you’re looking for,”
Kaila nodded and a thoughtful smile flitted across her face. “You know, in some ways, I feel like I already have.”

And with that she turned, ready to board the plane toward her final destination.