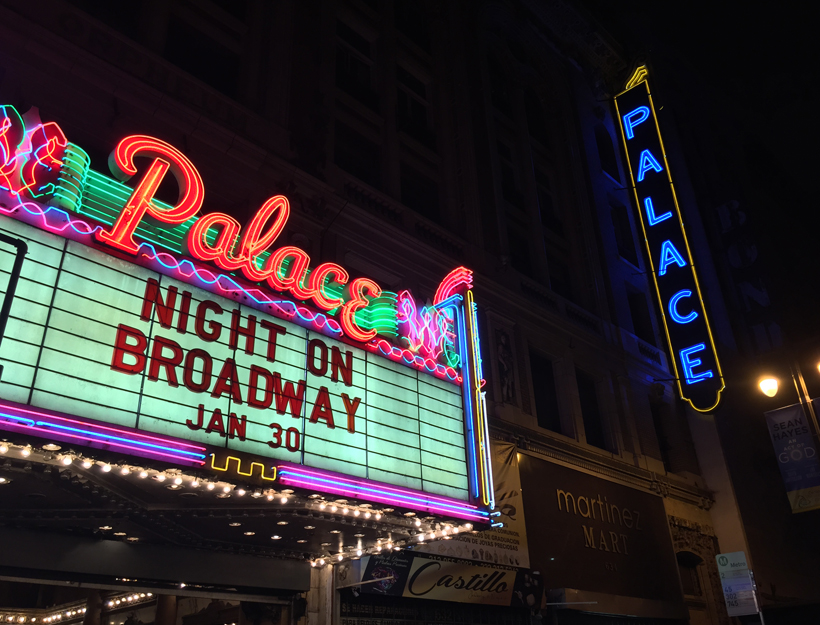 So what do you do when the City of Los Angeles closes down multiple city blocks (from at least 3rd through 7th) on Broadway and throws one big city party?  Culture Honey decided to jump in, join the estimated 30,000+ people that show up annually and see what all the hubbub is about!

Night on Broadway is touted as an evening of “food, entertainment, culture and arts to celebrate the 8th anniversary of Council-member Jose Huizar’s Bringing Back Broadway”, and the gist of it is we had a great time!  There were 7 historic theatres open showcasing everything from self-guided tours, to food,  to DJ’s, a science fiction exhibit, and even a full on New York style Broadway musical!

The theatres themselves are so very cool, and worthy of any and all highlighting in L.A.  My great, great, aunt “Anna” actually played in some of the theatres (like the Orpheum Theatre among others!) back in the 1920’s!  I wish I had a scanned photo handy, but the one I’ve seen is her in full vaudeville costume sitting on a turned around chair and showcasing quite a lot of 1920’s attitude : )  My grandmother was born in Los Angeles proper and used to ride the “red car” out to Venice to spend the day with friends.  So my family goes “way back” in Los Angeles’ time, ha ha, but anyone that lives here knows that tends to be pretty rare.  I know there is a “New Broadway Forum” pulling together to continue to talk about revitalizing the area.  I hope they are successful in an organic, community conscious manner!

One of the coolest thing we saw (and many things were FREE – except the $5 (!) bag of popcorn at the Globe) was a Broadway style show by Zen Arts called “The Last Night at the Orpheum Theatre“. It was a great show! Period-specific costumes were on display, with actors and musicians greeting and mingling with the crowds before the show started. The music and dancing were entertaining, and the whole production took place in the beautiful environment of the theatre – at no cost! Pretty sweet!

On the street, all kinds of booths and food trucks were available (and when did L.A. get a Two Boots!?! I am behind the times, since I only know them from the East Village in NYC!) There were activities for kids and families, including some very cool street art scenes to take photos in front of as a keepsake from the night.  There was a ferris wheel and a boxing ring too!  I cannot forget to mention the “Silent Disco”!  Have you ever seen a whole bunch of people with headphones on *sort of* dancing together in public?  An interesting sociology experiment if nothing else!  At the end of the night Central Market was open, so after wandering through we decided to partake in some nourishing Texas style beef brisket sandwiches outside at the Horse Thief BBQ!  Dee-lish – with a view of the historic “Angels Flight” funicular just in sight, we couldn’t ask for a better ending to an entertaining, authentic-Angeleno community, celebratory evening in Los Angeles, CA!

Then it was back to the Pershing Square metro station for us until our next L.A. adventure!
*