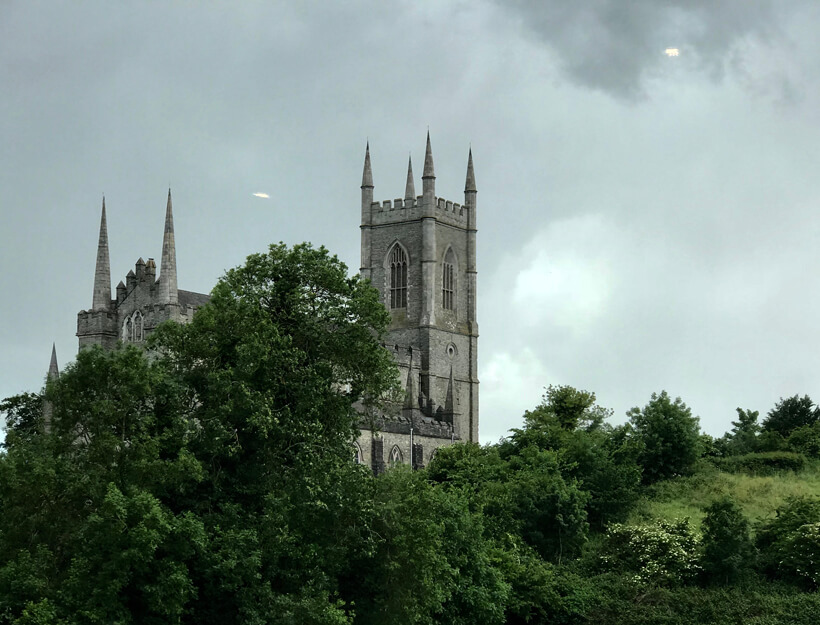 In Search of Saint Patrick

Like flocks of sheep scattered among the hills, history and legend link numerous places throughout the Emerald Isle to Saint Patrick. . This presented a challenge for Culture Honey Touring when we traveled to Ireland last June to handpick sites for the Celtic Way Pilgrimage we are hosting this September. Our quest was to find places where we would learn the true story of the man, tread in his footsteps, and enter into those holy spaces where Patrick’s mission opened doors for God’s Spirit to move across the land. To accomplish this within manageable distances seemed a daunting task until we arrived in Downpatrick in Northern Ireland.

Downpatrick: The Place Where the History of Saint Patrick Begins 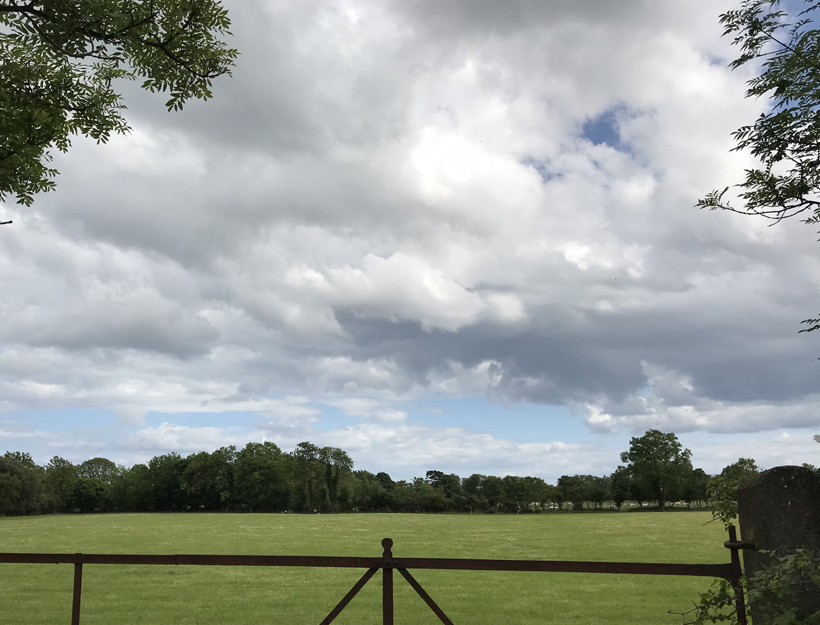 The modest city of Downpatrick is located 42 minutes SE of Belfast and 2 hours NE of Dublin.  It is called The Place Where the History of Ireland Begins due to its historical links with Saint Patrick. This is the area where his mission is reputed to have begun and where he is said to have died on March 17 sometime between 460 and 493 AD. Through its historic landmarks and museums, Downpatrick enables contemporary pilgrims to get acquainted with the man, his mission, and its far reaching impact upon the Irish people and the world at large. 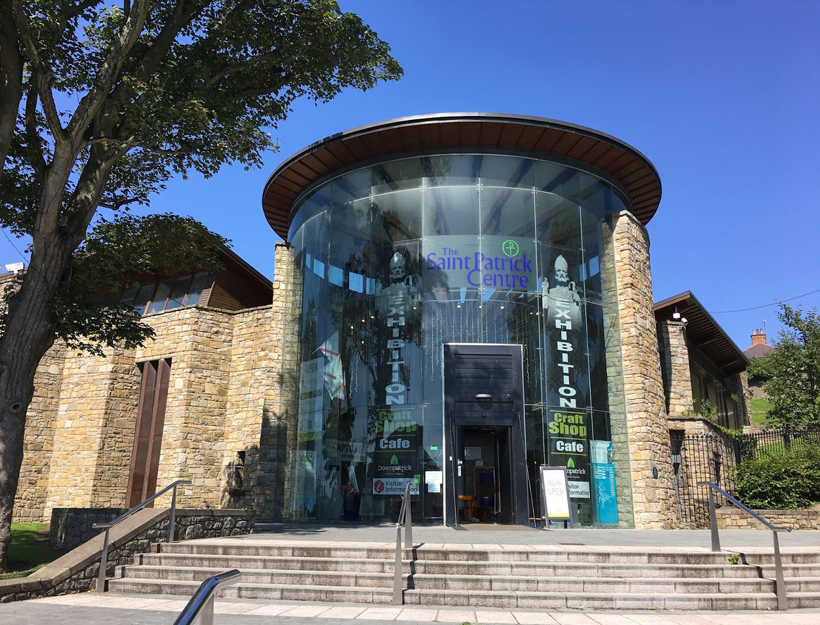 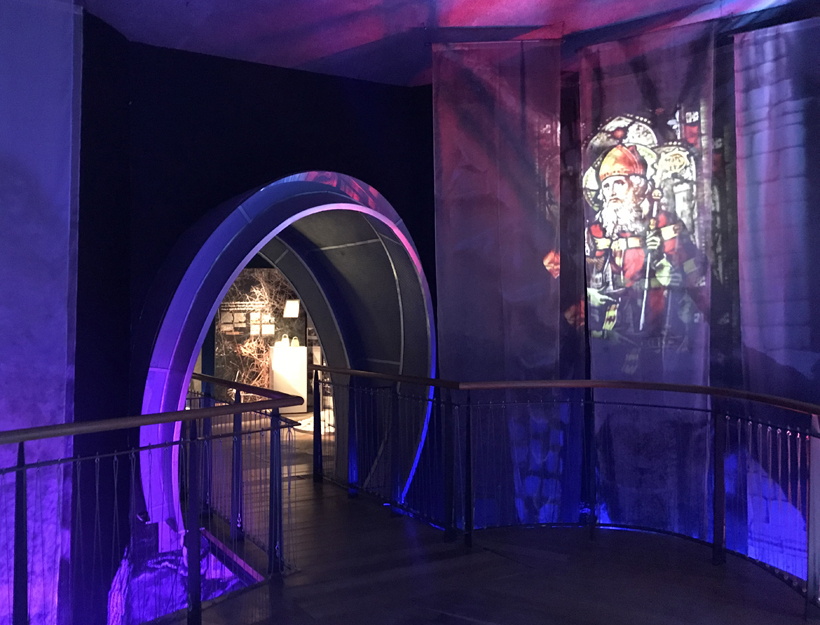 I felt like a pilgrim walking alongside the venerable saint as we stepped into the Roman Britain of his childhood, and witnessed his kidnapping, slavery, arduous journey home, return to Ireland, and the challenges Patrick faced as he preached the gospel among the Irish. 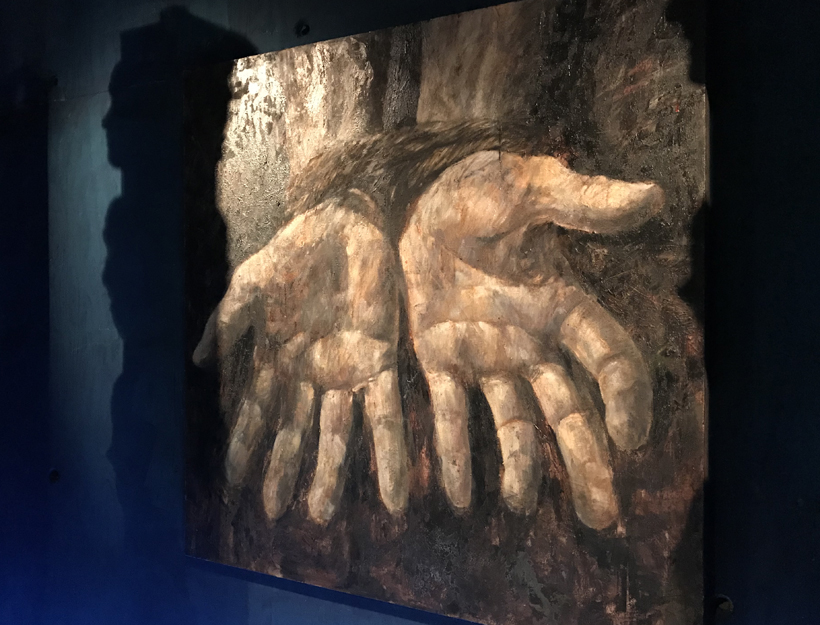 The Time Bridge leading out of the 5th century ushers visitors through the centuries following Patrick’s death revealing the impact of his mission as Christianity spread and developed into a revival that captured the entire island. It traces the establishment of monastic centers of learning, art, and culture that became training centers for missionaries sent out to kindle the light of faith, learning and culture throughout the ‘known’ world. A video relaying research and opinions of  contemporary scholars discussing Patrick’s life, writings, and legacy was especially illuminating. The exhibition closes with the IMAX film, Footsteps of Saint Patrick, which simulates a helicopter ride over sites associated with the man known as Patrick, Apostle to the Irish.

Cathedral Hill is the tallest hill in Downpatrick where Down Cathedral, Patrick’s Grave, a round tower, and monastic ruins can be found. While standing on its summit gazing over a sea of green, it is difficult to imagine that for centuries the town was surrounded by water on three sides. The ancient sea port and trading center was the royal seat of the Kings of Ulster and was known as Dun (Gaelic for fort) due to the imposing fort that once overshadowed the village. In the 13th century, the town adopted the name Dun Phadraig or Downpatrick as it is called today.

Disembarking at Dun was likely a strategic decision. During his six years of enslavement among the Celtic tribes, Patrick came to understand the politics of the land and the necessity of gaining royal sanction in order to preach the Gospel within the King’s domain. 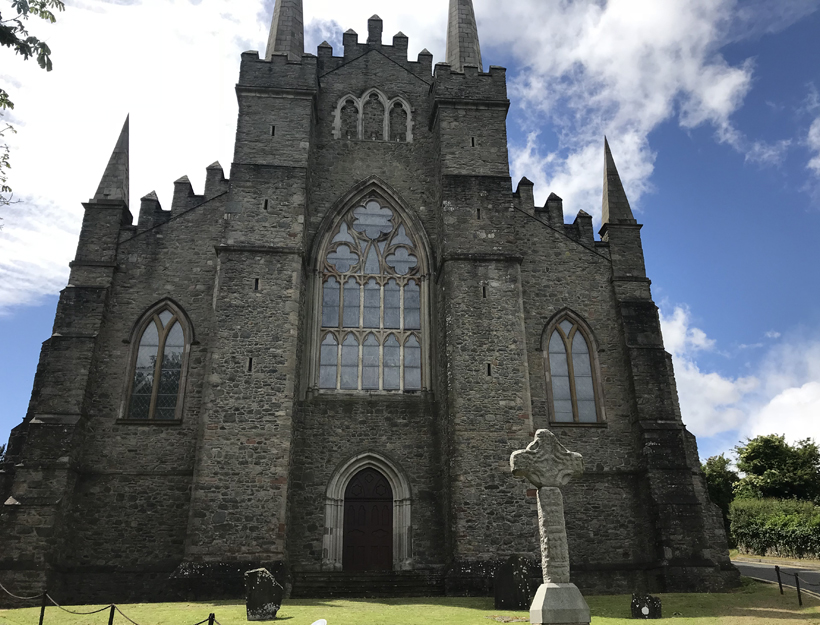 Down Cathedral crowns the top of Cathedral Hill. It was built upon the site of a Celtic monastery where the remains of Patrick were interred. Over the centuries, the Shrine of Saint Patrick drew pilgrims and plunderers alike. This holy site was raised by Vikings during the 8th century, rebuilt, ravaged and rebuilt many times until its final destruction during the Dissolution of the Monasteries in 1541. Worship services continued to be held among the ruins until 1790 when a group of clergy and nobility decided to raise funds to rebuild the church. 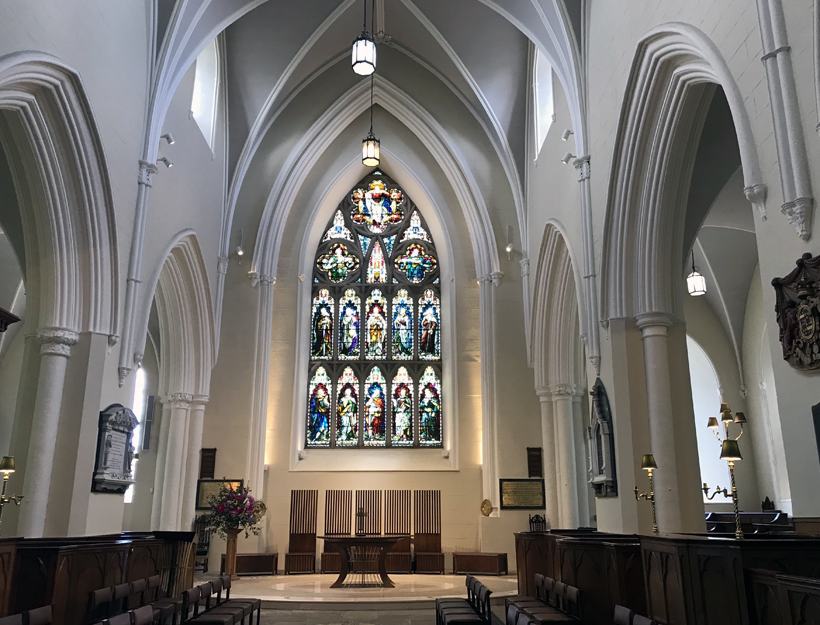 The restoration of the cathedral that stands on the hill today was completed in 1818. Its main walls date back to the 13th century. Inside the cathedral, one steps into a place of holiness and peace built by stones bathed in prayer throughout the centuries. Vibrantly colored stained glass windows fill the sanctuary with brilliant light.

~ “In Down, three saints one grave do fill, Patrick, Brigid and Columcille.” ~ 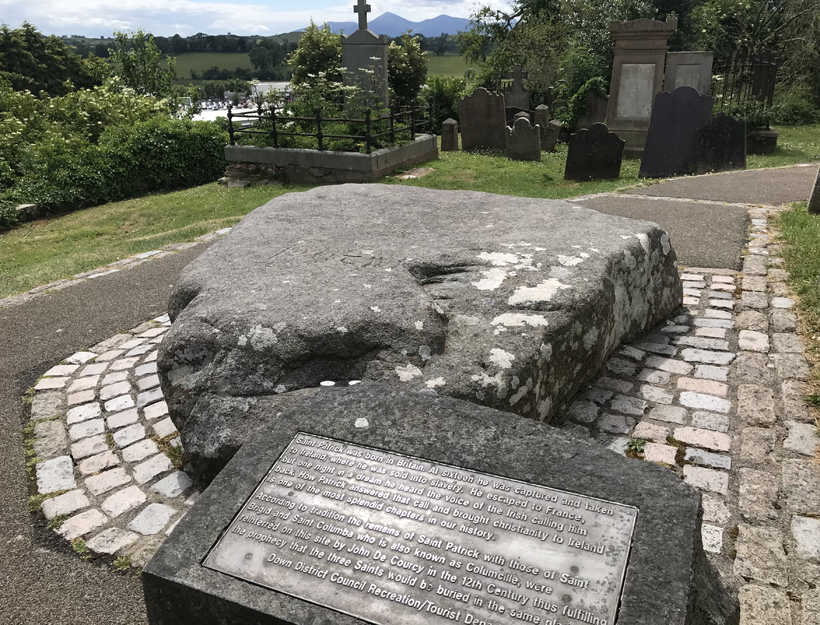 A colossal granite boulder sits among the gravestones in the churchyard of Down Cathedral. Carved upon its surface is a Celtic Cross and the name Patrig. The enormous stone is a monument to Ireland’s three patron saints; Saint Patrick, Saint Brigid, and Saint Columba who are said to all be buried on Cathedral Hill.

On the road leading up to Cathedral Hill is the Down County Museum located in the 18th century town gaol. Housed here are exhibits relaying 9000 years of local history. This includes exhibits about Saint Patrick, the development of Christianity, and crime and punishment in Old Ireland. The High Cross that once stood on Cathedral Hill can be seen along with other early Christian artifacts. 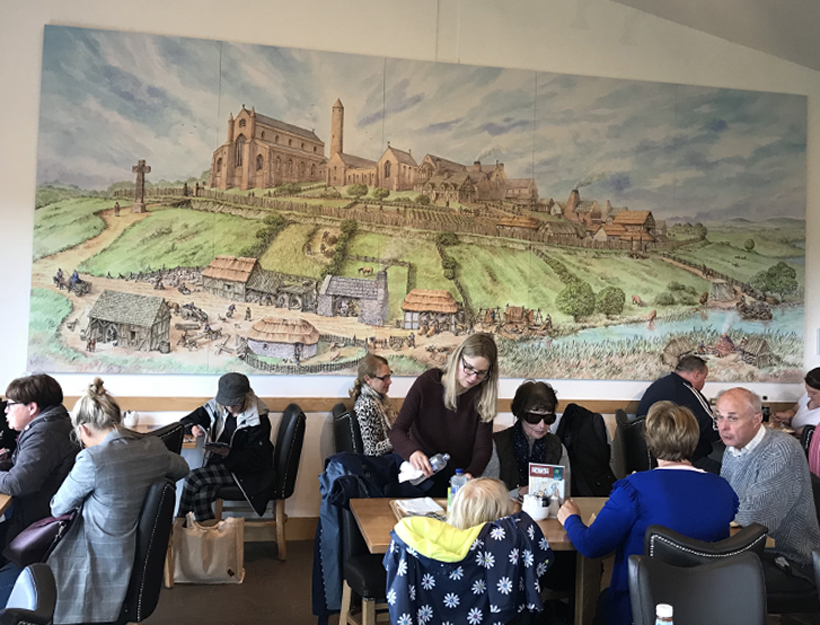 A tearoom serving homemade food is located in the museum. This is a convenient spot to have lunch or tea while enjoying a panoramic view of Down Cathedral. 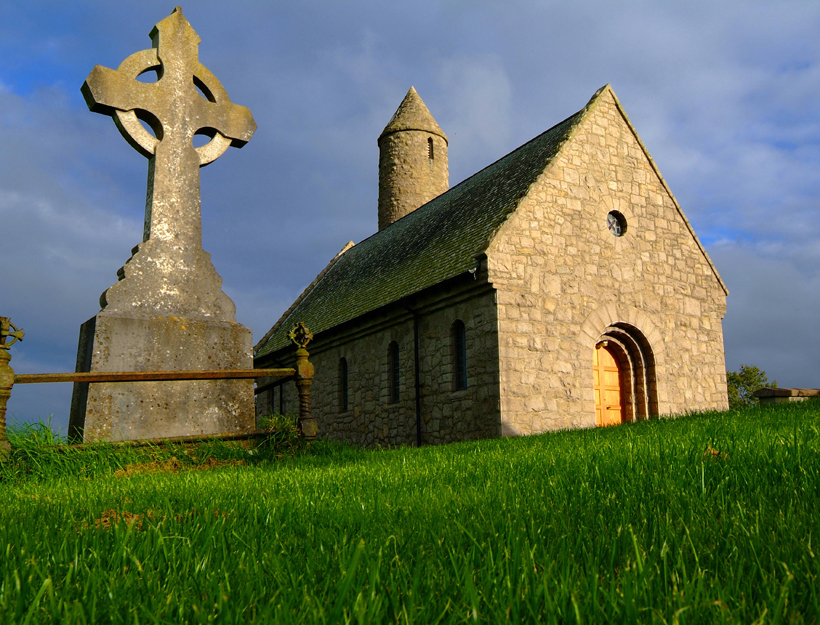 Two miles outside Downpatrick’s city center stands Saul Church known today as the Cradle of Christianity in Ireland. According to 5th century annals, Patrick and a group of monks sailed into Strangford Lough landing at Saul in 432 AD. Here, he met Dichu, brother of the High King of Ulster, who became his first convert. The Prince provided Patrick with a barn (sabhall, in Gaelic anglicized to saul) which served as his first church. From Saul, the saint traveled throughout Northern Ireland preaching the Gospel of Jesus Christ, converting and baptizing thousands, and establishing many churches. After nearly 30 years of ministry, Patrick became ill and died during a visit to the congregation at Saul. He was subsequently buried on Cathedral Hill.

A monastery stood at Saul for 300 years before it too was destroyed by Vikings. Saul Church was erected in 1933 for the 1500 year celebration of  Saint Patrick’s Irish mission. Remains of a 12th century monastery can be found in the church grounds.

Saint Patrick Lives on at Downpatrick

The life and legacy of Saint Patrick continues to be celebrated and experienced in 21st century Downpatrick. Each St. Patrick’s Day, the city is flooded with pilgrims from around the world who come to honor the Apostle to the Irish. The festivities include worship services at both of the churches that Patrick founded, pilgrimage walks and a traditional corned beef dinner. Worship services also take place at Downpatrick Cathedral and Saul Church every Sunday morning where, thanks to Saint Patrick, God has been worshipped continually for nearly 1600 years.