Spring in Budapest is an active season. 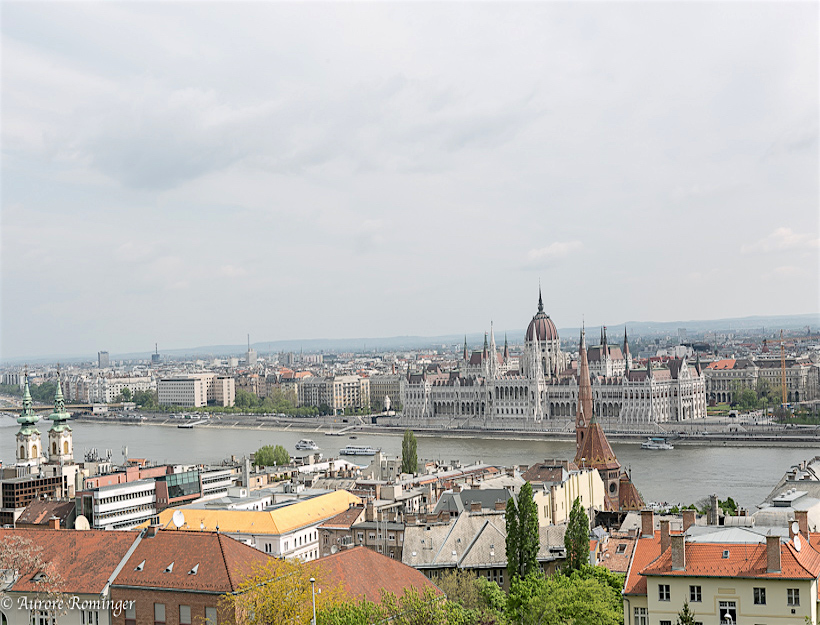 Budapest Hungary, Spring 2017;  From hills of Buda – gaze across Danube to Pest

Budapest offers museums and galleries, churches and synagogues, palaces and historic buildings. Two-sided Budapest was once separate cities, Buda and Pest, which stretched along the banks of the Danube. Each side now offers different characteristics of the city.

The dynamic Pest side boasts the largest parliament building in Europe. 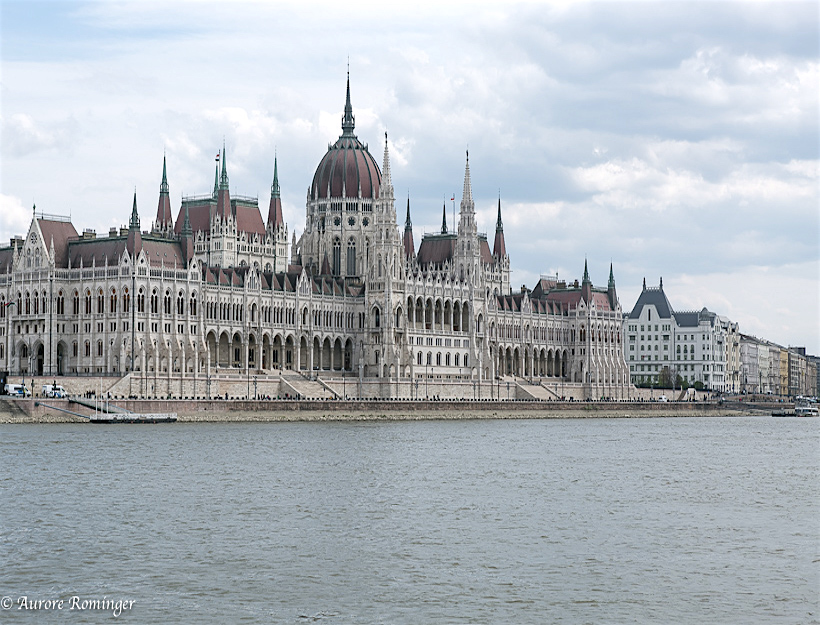 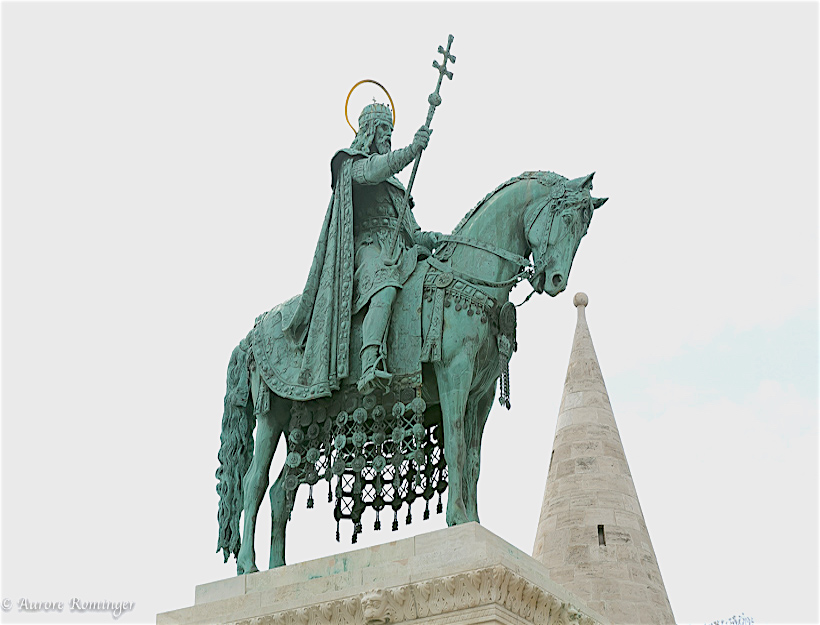 Remains from both Roman occupation and much later rule by the Turks can still be seen in Budapest. After the Ottoman Empire, the Austrian influence is recognisable in the city’s form and style. 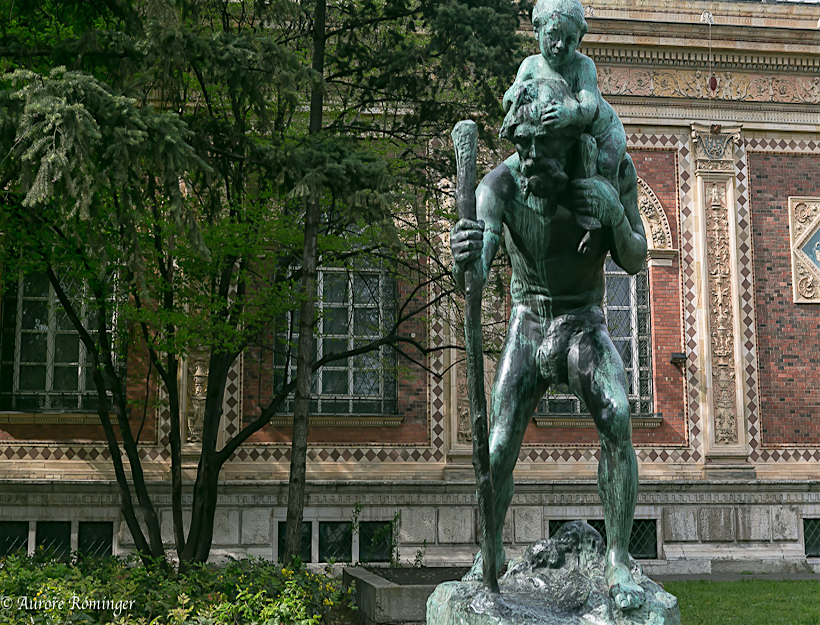 The feeling of the city is out of the ordinary: a sense of peace and mild civility emanates from this city of about two million inhabitants. Yet the city swells with activity as spring births the new life cycle of seasons. 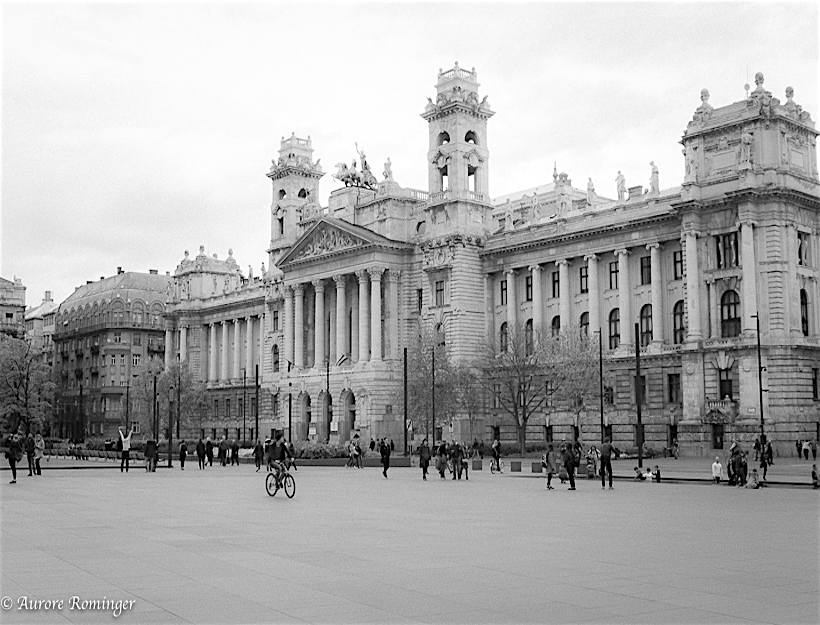 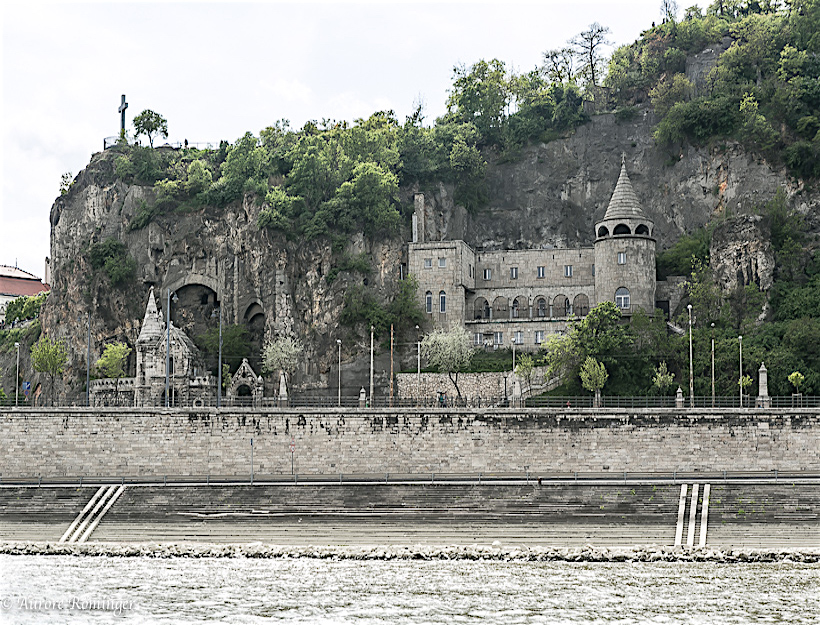 My brief and fortunate visit to Budapest included joining an organised Woodland Pioneer High School tour. Explorica Tours and the history professors guided a group of about 20 students along with some parents and grandparents through Budapest, Vienna, Prague and Munich during the school spring holiday. I arrived prior to the group and returned after visiting Budapest. It was an active visit, and I have not been to the baths. 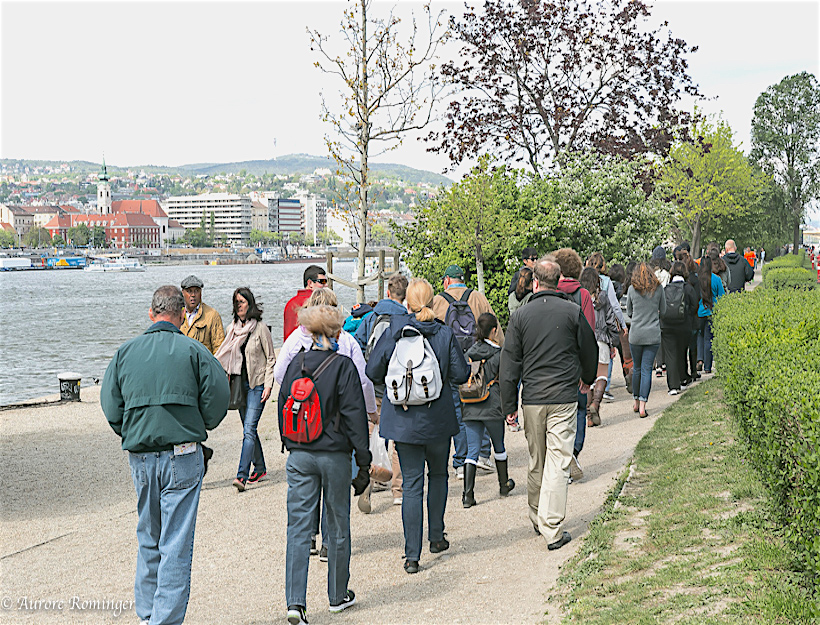 Among the bustling city visitors and student groups, this group of history students from Woodland, Northern California included family and friends. 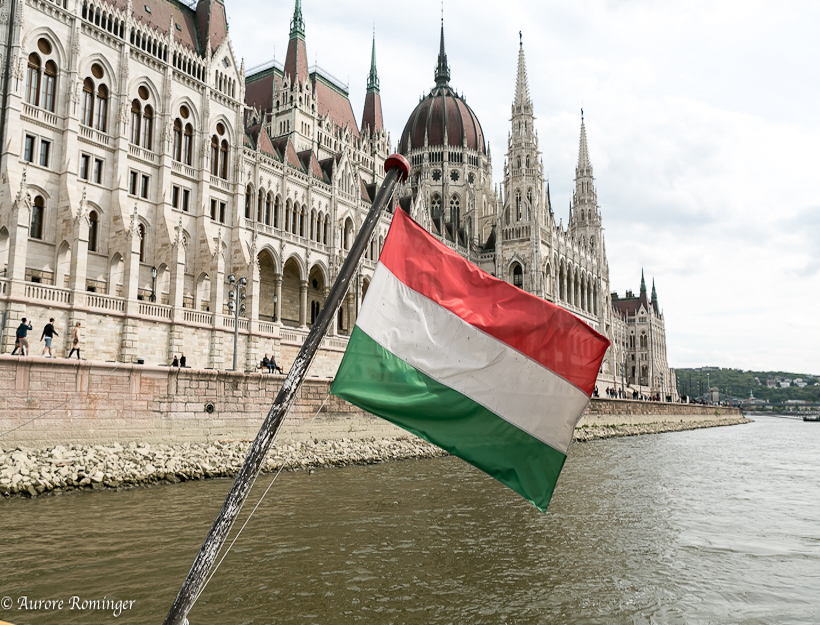 Generally, I take a taxi from the airport to the hotel, yet this visit I wanted to navigate the language, so I took the metro (Budapesti metró). It is (and the Line 3 feels every bit if it) the oldest electrified underground railway system on the European continent. After London, it is the second-oldest electrically operated underground railway in the world. The iconic Line 1, restored and maintained, completed in 1896, was declared a World Heritage Site in 2002.

This tramway below has been recommended as the second most economic sightseeing option after walking. 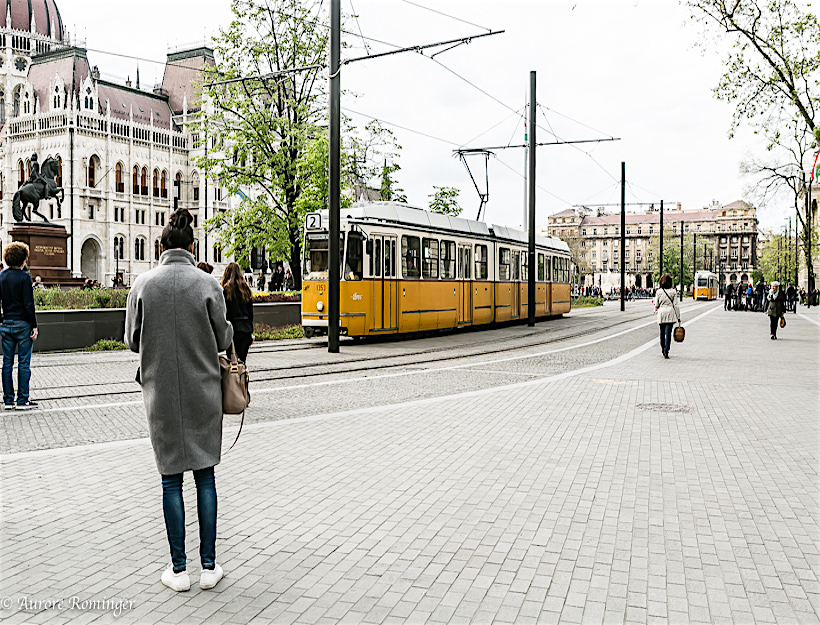 Budapest’s most picturesque panoramic tramline view – Tram 2 – runs all the way along downtown Pest’s riverbank, showing passengers all of the Buda side’s beauties for about a euro. 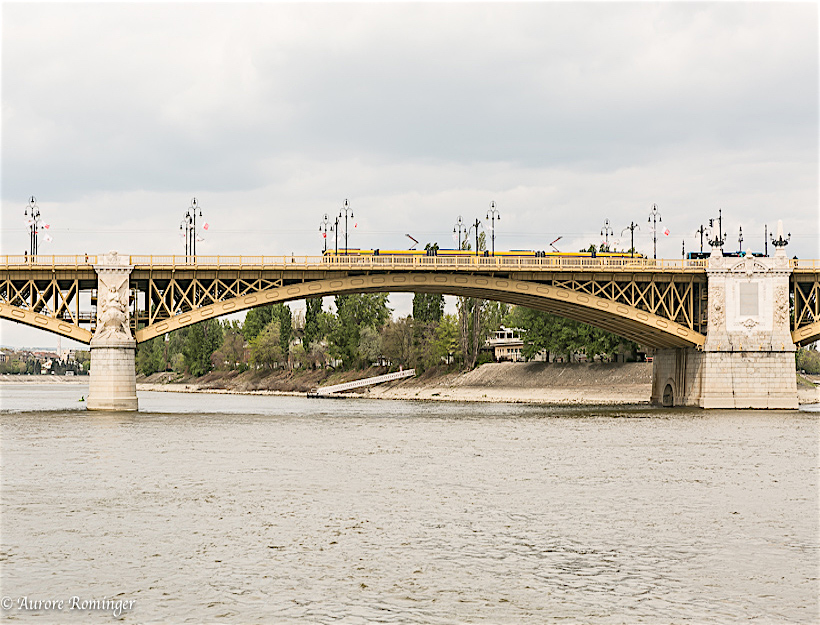 To complete the sightseeing experience, Tram 41 across the river entices all for a ride to see the splendid sights of Pest as well, such as the Parliament, the beautiful bridges, and some century-old buildings. All you need is one public-transport ticket to ride the rails and gaze at the wondrous views of Budapest.

Without the help of the hospitable and kind people, I would have been dismally lost. The Hungarian language has 44 letters, complex sounds and no obvious rhythm that I could identify. I made a list of: bonjour ‘scia’; yet good morning was, ‘jó reggelt’; merci, ‘köszönöm’ (hardly ever got that right!); and au-revoir/goodbye, ‘búcsú’, fairly easy pronunciation, ‘boochoo’, yet rhythm counts too.

Hungarian (magyar) is an Ugric language with about 15 million speakers in Hungary (Magyarország) and in communities of Hungarian people in neighbouring countries such as Romania, Slovakia, Serbia, Croatia and Ukraine. Finnish and Estonian communities worldwide belong to the Uralic language family, and its closest relatives are Mansi and Khanty. 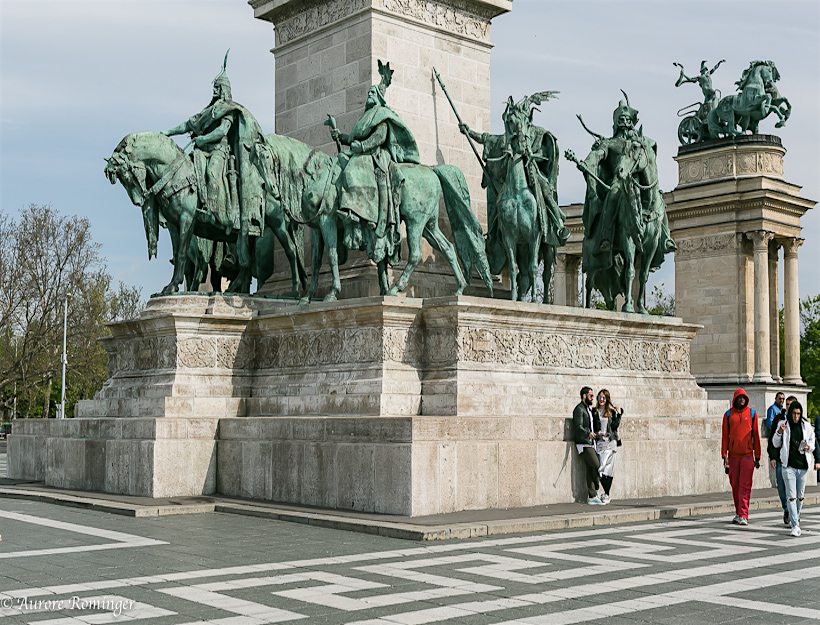 Development of the language started around 800 BC with the southward migration of the nomadic Ugric groups. The history of the ancient Magyars during the next thousand years is uncertain, and Hungarian history is long and complex. 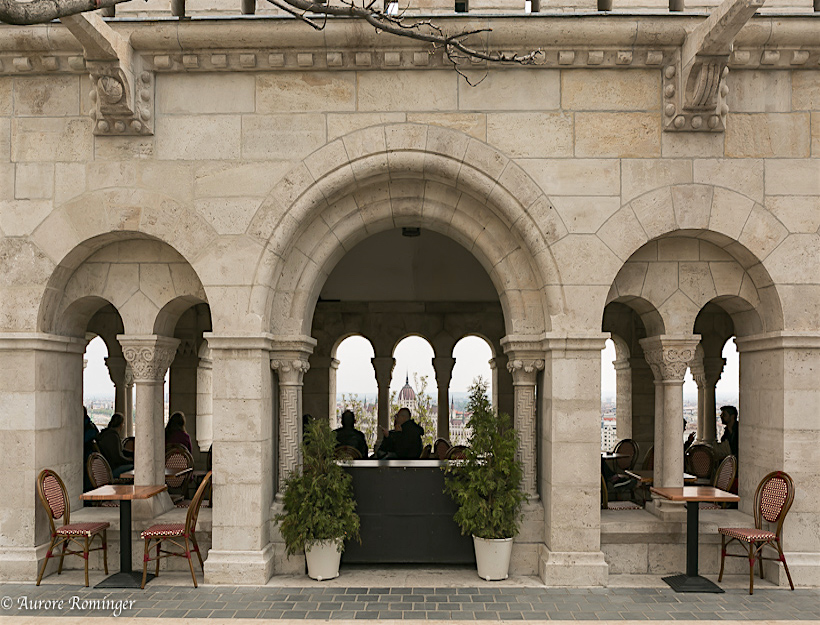 Budapest celebrates its 1,000-year-old culture this spring with installation art: letters spelling ‘Budapest’ at the Easter Market and in the main square where ‘Archangel Gabriel’, messenger to humans, watches over the city. 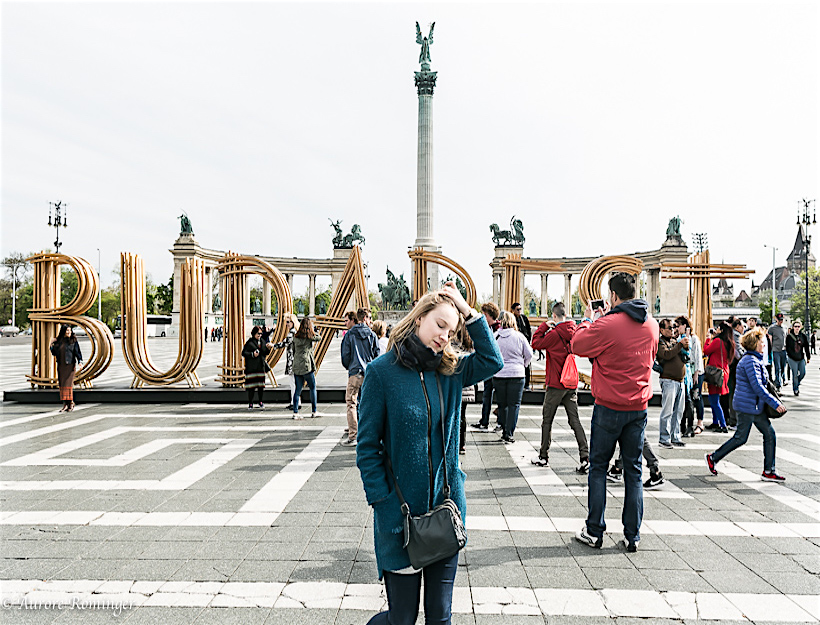 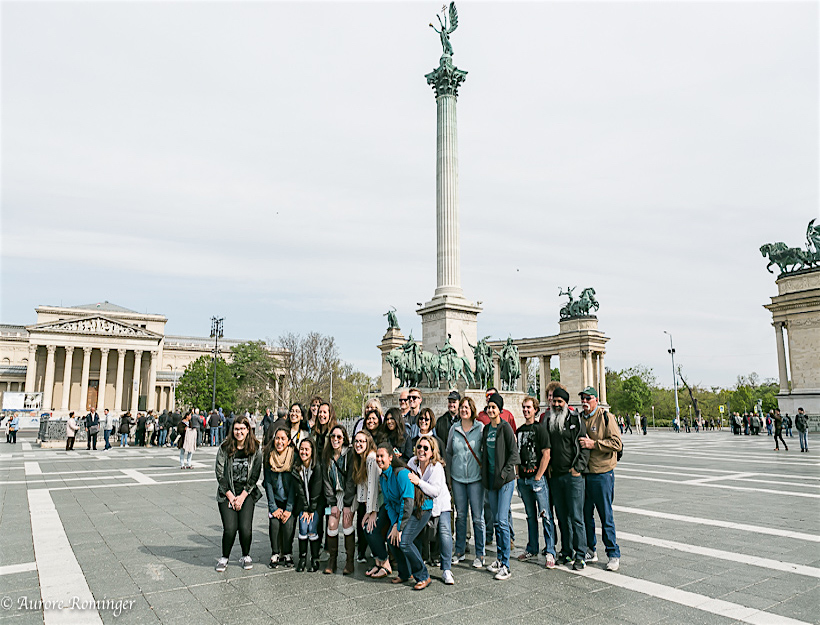 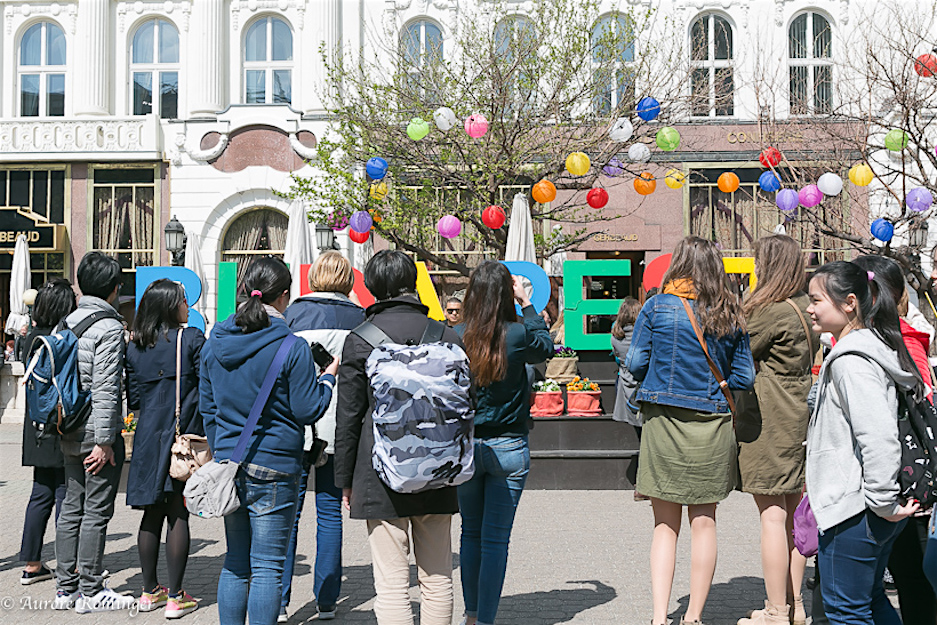 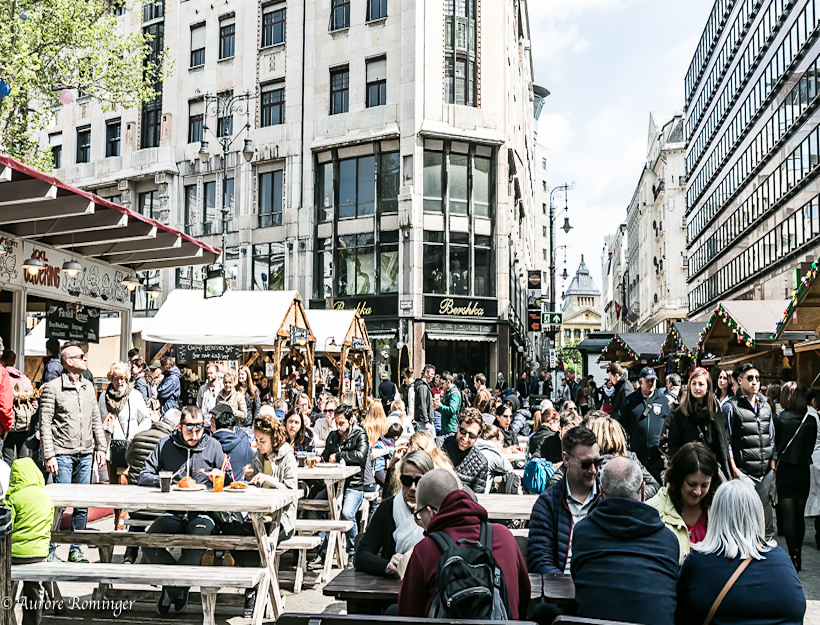 Below, I happened upon this newsworthy and unprecedented demonstration in support of a U.S. funded university threatened by recent legislation (by Marton Dunai Budapest). 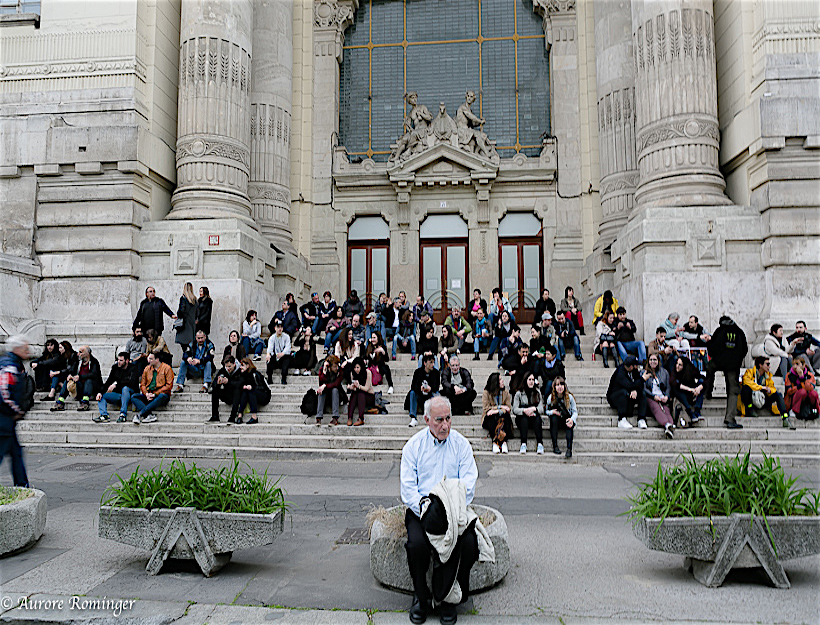 As informed by the tour guide, Hungarians generally value education, art, music and books, and freedom. 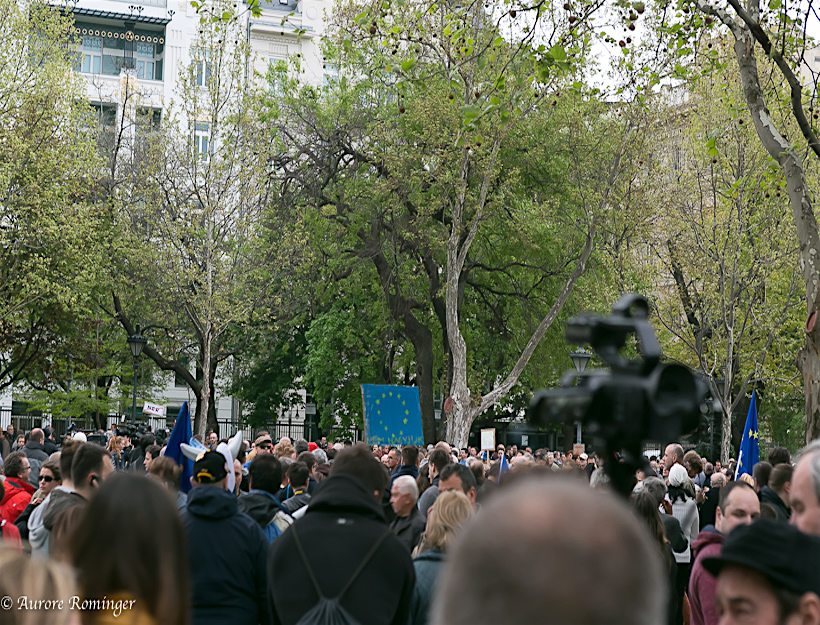 On Sunday, Hungarians, in one of the largest protests against the seven-year rule of right-wing Prime Minister Viktor Orban, protested new legislation that could force out one of the country’s top international universities.

The Central European University (CEU), founded by U.S. financier George Soros, could be forced to leave Hungary after a bill passed in Parliament this week set stringent new conditions under which it must operate.

The bill has led to criticism from hundreds of leading academics worldwide as well as from the U.S. government and the European Union. We’ll have to check on the results of this protest.

Additionally, I was privileged to witness the crowds and events occurring on Hungary’s Holocaust Memorial Day which marks the mass detention and deportation of Hungary’s Jews in 1944. 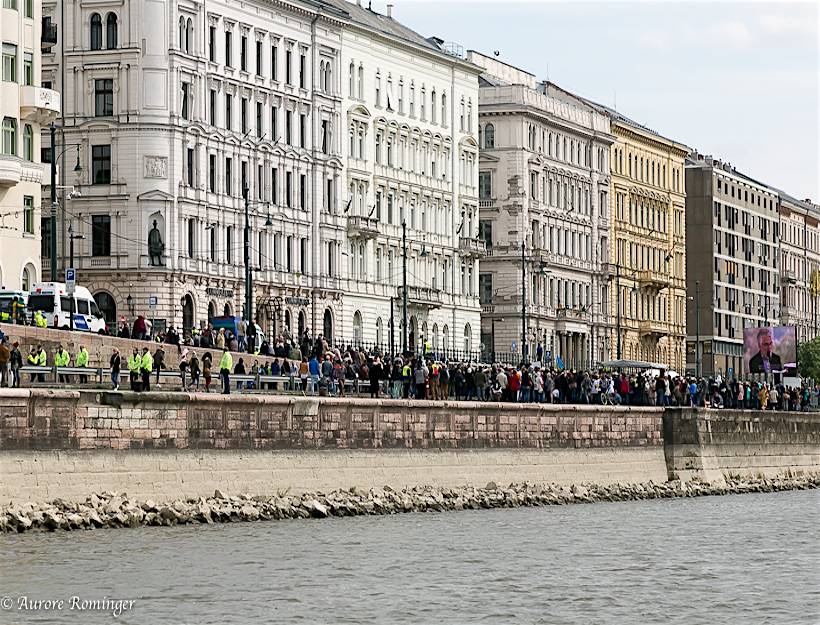 The event began at the ‘Shoes on the Danube’ memorial, which honours people, mainly Budapest Jews, shot by militiamen. They were ordered to take off their shoes and stand by the water before being shot so their bodies were carried away. Only their shoes remained. In my opinion, this is a hideous example of human behaviour! 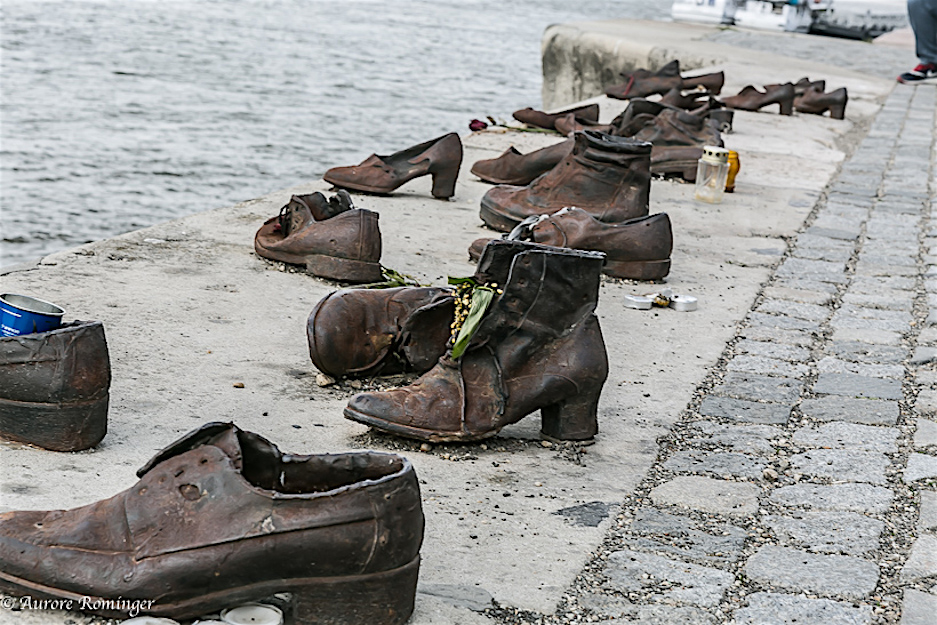 Thousands of people attended the memorial gathering near  the ‘Bronze Shoes’ and participated in the ‘March of the Living’ – an event to commemorate the 550,000 Hungarian Jews killed in the Holocaust. 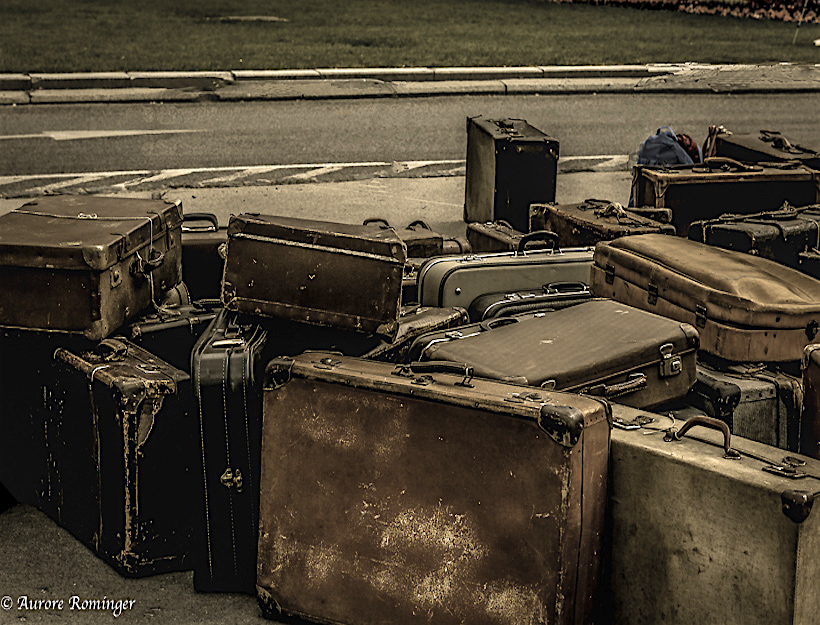 Speakers warned of the dangers of rising anti-Semitism and stressed the importance of remembering and learning the lessons of the past. In my opinion, learning is a brilliant example of human behaviour!

And after all of this activity, wise tourists enjoyed a rest on a bench in a garden in the sunshine and fresh air. So much still to see – the gallery at the end shows some modern architecture. 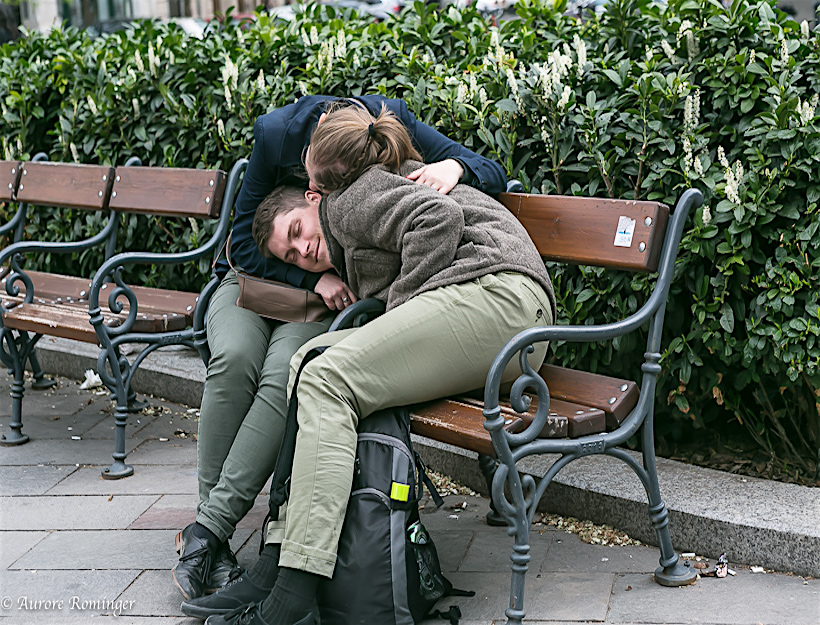 I will return, if only for the relaxing experience of the thermal baths! It is a lovely city to visit.

Stay with the beauty, and Happy Spring!
*