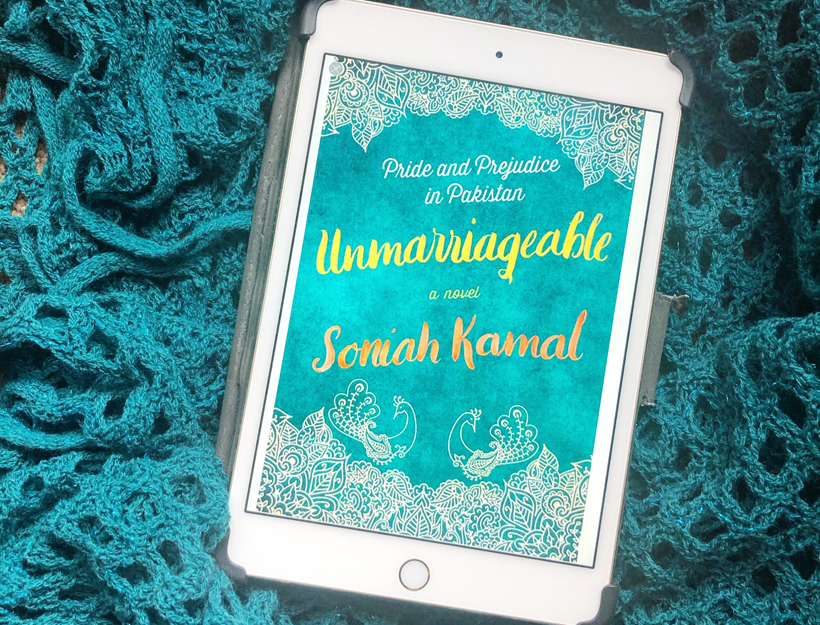 Unmarriageable: A Book Based on a Book

It is a strange thing, reviewing a book based on a book of which one is very fond. It is strange because the quality of the book is based not upon its own plot line and originality, but upon its ability to be both its own creation and yet a replica of something else. It is either the parasitic mistletoe, growing and feeding off the host tree, or the epiphytic orchid, buildings its base on the tree, but being its own creation and thriving by itself.

Unmarriageable’s unique situation is both its greatest strength and its one criticism – I’ll get to that later. There is no hiding the mirror that Soniah Kamal seeks to hold up to Austen’s masterpiece. Its full title, Umarriageable: Pride and Prejudice in Pakistan, tells the author from the get-go what it is. And if the reader had any doubts about how similar it was to be to Austen’s masterpiece, the characters Alys Binat (Bennet), Valentine Darsee (Darcy), Fahad Bingla (Bingley), and Jeorgeullah Wickaam (Wickham) quickly put any doubts to rest; nearing scene for scene, Unmarriageable is Pride and Prejudice. It felt a little like watching the movie of a loved book and hoping beyond hope it wasn’t a cheap imitation.

It wasn’t. What was loved in the original, at least for this reader, was kept in Kamal’s version and even added to. It was a fresh take on a classic and one where the essence of the story and what Austen was trying to accomplish was not lost. Kamal’s use of the school where Alys and Jena Binat taught provided a small, yet brilliant subplot to the novel, allowing a speedy introduction of the characters and their personalities, as well as providing brief moments of humour and conquest which only sweetened the story.

Pride and Prejudice itself is discussed prominently in pseudo-breaks of the fourth wall throughout the story. In the first chapter, its merit and meaning are analysed and the reader is given a clear account of Alys’ views on Austen and on marriage. While a little on the nose at times, it sets up Alys’ character well and raises the question of Kamal’s own intent for the rest of the novel. How will Kamal address the same issues Austen addresses? Will her work bear the same level of cultural insight? Will her work represent the issues currently faced in Pakistan and around the world?

A great make-or-break in a novel where the plot line is known is the use of rhetoric, structure, and character development throughout the novel. Here Kamal succeeds in all three areas, building an enjoyably written novel where, just like the original, the reader falls in and out – or out and in – of love with each character as they appear. Perhaps my favourite of the rhetorical devices used by Kamal was during her description of the food at NadirFiede’s walima. A good congeries is hard to pull off, and while I confess the similarity between the list of prawns in Kamal’s novel to the list of shrimp in Forrest Gump did force me to fight the urge to read with the voice of Bubba Gump, it brilliantly captured the immense wealth of the gathering. Overall, the lyrical rhetoric used throughout the novel was brilliantly accomplished.

The main drawback of Unmarriageable is perhaps also its greatest compliment. It’s too short. In a novel where the reader already knows what will happen, it is incredibly difficult to keep the reader’s attention and persuade them to keep reading. Kamal accomplished this with ease. However, as a huge fan of the original, as well as a fan of long and deep description, I found myself wanting a more drawn-out ending, an ending where the intended emotional response was elongated and nurtured before coming to its expected conclusion.

It is an odd criticism – for it is saying the novel was so good that this reader was annoyed when it ended – but it is also perhaps the one unconquerable challenge of what Kamal set out to do. Austen is one of the greatest writers in English history and to produce a written work modelling hers is no small feat. One remembers the scene where Elizabeth, who has already told Darcy she will never marry him, must find a way to reverse her decision. One remembers when Elizabeth must reveal to her father all Darcy has done for them regarding Wickham, the final big reveal (for the family at least) of the novel.

These are incredibly difficult scenes to replicate, and while Kamal’s work is a brilliant rendering of Pride and Prejudice, I only wonder if perhaps it is impossible to recapture the novel’s immensity in any reworking.

Ultimately, however, when the only criticism is that one wishes the book were longer, that there were more to read, it cannot be a bad thing. Not only is Unmarriageable thoroughly enjoyable for fans of Austen’s original or for those who’ve never heard of her (for shame!), it is also a much-needed novel for our time. Whether it was the writer’s intention or not, the importance of the story at such a time in history cannot be ignored. In a world where fear of the other plagues so many of us, Kamal’s story is for this Western-based reader a window into another life, breaking through the noise to show just how similar we all can be. Different cultures bring differences, but they also bring similarities, and a Pride and Prejudice in Pakistan is the perfect highlighting of this, showcasing some of the struggles we all share.

Overall, Kamal’s work is a brilliant rendering of Austen’s masterpiece. It takes the cultural criticism and analysis that Austen is known for and replicates it beautifully. Challenging as it may be, Kamal mimics Austen’s combination of wit, wisdom, and insight with great success so that reading this novel was a thoroughly enjoyable experience.

Well worth a read.
*