Let’s talk God.  Or Goddess.  Or Spirit.  Or whatever terminology you use to speak of that which is beyond you.   That which inspires you and maybe even motivates you.  Sitting and gazing up at a tall redwood tree?  The experience of walking along a peaceful shoreline?  Riding a bike through a particularly awe-filled space of beauty?  Looking into the eyes of your child?  You know the feeling, as do I, when the sense of “something beyond” comes upon you.

For Scottish author George MacDonald, that “beyond the self” was a being, a presence, a force of nature often accompanied by magic or mystery, and he wrote with the assumption of a divinely-infused creation undergirding his work.  Called pan-en-theism, which means “god IN all,” this belief was (and is) in contrast to pantheism which claims all matter *is* God.  Fun fact: John Philip Newell notes in his book, Sacred Earth, Sacred Soul (reviewed for Culture Honey in November 2022), MacDonald was “the nineteenth-century equivalent of J.K. Rowling in British literature,” which explains why much of MacDonald’s writing was categorized as children’s literature; but, like the Harry Potter series, with themes inspiring to adults as well.

MacDonald’s most famous work was this one.  A delightful story of a young princess with a vivid imagination—or perhaps, a most sophisticated faith that sees the presence of generous love in much of her own life—who is named Irene, meaning “peace.”  The story evolves as one of embodied peace and harmony, a peace that can certainly be upset by untended fears, yet also that extends to include even grotesque-looking creatures quite dissimilar (and perhaps frightful) to oneself.  In other words, Irene though young, lives her life as if peace is not only attainable, but widely and wildly accessible in the everyday world.

In time, Irene meets an old great-grandmother, living high up in a tower, spinning thread.  John Philip Newell reminds us that “she was in fact the beautiful mother of all grandmothers…the thread she was spinning was a golden thread that was woven through all things.”  The Force, as the Star Wars stories would affirm.  Magic, we hear Harry, Hermione, and Ron agree.  The Divine, so the ancient Celtic tradition teaches, infusing and animating all things.  In the MacDonald storyline, the golden thread, invisible to others who are not yet ready to see it or need it, leads Irene to her own safety and also allows her to assist another in getting out of life-threatening situations.  But this may be TMI—a spoiler!—for those readers who wish to discover on their own the magic of the princess’ story.

Without giving away more of the actual story, we return to John Philip Newell’s observations.  He discusses four main themes in this so-called children’s book:

1) the Sacred Presence is close to us, within the very household of our being; 2) we are of the divine; 3) although we are of the divine, we are capable of terrible falseness, or what MacDonald calls the ‘subnatural;’ 4) despite our capacity for falseness, the golden thread is not severed…deep within us is the gift of our sacred lineage—if we are true to it, we will be led to new beginnings.” (JPN, Sacred Earth, Sacred Soul, chapter 5: “Sacred Imagination: Alexander John Scott”).

George MacDonald met this Alexander John Scott several years after Scott had been unanimously voted out of the Church of Scotland for heresy.  Scott’s belief in the divine as animating all life didn’t go down well with the higher-ups who stood to gain much from the traditional teachings of the church.  As a young student, MacDonald found his way to Scott and was drawn to Scott’s boldness and his understanding of imagination as a key to bringing all things back into relationship again.  As Newell describes their mutual philosophies, “reimagining our way into the essential interconnectedness of the universe.”  Classic Celtic teaching, as well as helpful and instructive for finding our way through the current climate crisis.  Again, Newell summarizes the work of Scott, which greatly influenced the writings of MacDonald:

‘The sum of the whole matter is this,’ (Scott said) ‘that the most important work for us to do from year to year, from month to month, from hour to hour is to combine earth and heaven, time and eternity.’  This is the role of the sacred imagination, to help us remember the ‘curve of oneness’ from which we have come.  It will strengthen us in the sacred work of seeking true relationship with one another and the earth.

Here are a few gems from the magical journey of our little peace princess Irene:

Why read this little book from 150+ years ago?  In a word: Imagination.  Something of the author’s own imagination just may inspire your own!  However, a word of caution: the style of MacDonald’s writing is as the old bards with a thesaurus of words at their immediate disposal.  He steps out of mid-19th century Britain to tell you a bit about yourself!  You are connected to all life.  Guided by a force of goodness.  Able to help others along the way.  And, finally and most importantly, you are filled to overflowing with creative imagination enough to improve the world in which you live.  Can I hear an amen?!? 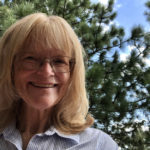 Dr. Sharon Graff, a retired minister in the United Church of Christ, found her way to the Celtic path while on her first silent retreat in Ireland in 2005. Appreciating the cyclical rhythm and respect for the natural world embedded within Celtic spirituality, Dr. Graff has read widely, traveled throughout the Celtic world by herself and with others, and taught countless people the Celtic values of eco-spirituality. Sharon is also a certified spiritual coach and sound practitioner with a happy little sangha of crystal and Himalayan singing bowls, chimes, and tingshas. She enjoys restful quiet time with her husband, Dr. John Sweeney, at their beautiful geodesic domehome in the San Bernardino Mountains of Southern California.

It will lead you home