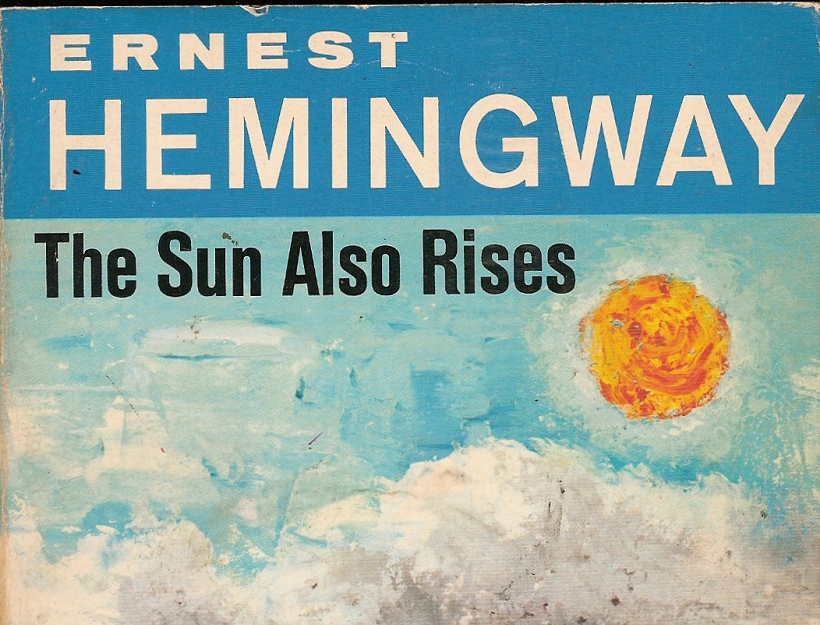 The Sun Also Rises was first published in 1926 by Ernest Hemingway and remains a literary masterpiece to this day. Below is a little bit about the man and his book.

Hemingway was not built for the 21st century.

That is not to say he is not a brilliant writer (this he is), nor is it to say his books do not still hold significance in today’s age (with all that is happening in the world, I believe they hold a greater significance than we realise).

What that does mean, however, is that a little education is needed before sitting down to read Hemingway.

And that, sadly, usually places Hemingway on the bookshelves of the high school English teacher where it gathers dust for eleven months out of the year.

A little backstory: Hemingway was a member of the Lost Generation, one who found himself in Europe during the wars without really knowing what he was doing or why he was doing it. He didn’t really fit in anywhere, affected by the war and the changes going on around them. Europe, especially Paris, at that time was also buzzing with artistic creativity and experimentation. Emotions after the First World War were high and life, if seemed, was in full swing. All this created a bizarre mix for anyone involved, a sort of lost euphoria and ecstasy.

The Sun Also Rises is written in this style. It follows the story of a band of expats who go to Spain to watch the bulls running. But nothing really happens… that’s not true. A great deal happens and they find themselves in a variety of random situations. But there’s no overarching conflict and therefore no definite resolution. Its flow moves along, building a little here, falling a little there. The common theme of the novel is really that there is none… sort of… ish.

And that’s the trouble with The Sun Also Rises. There is a plot line, there is a purpose, and there is a lot going on in that book. It’s just that you must be aware of where it comes from, where it’s written, who it’s written for, and why it’s written. Without this, it seems like a very interesting, but altogether lost novel.

Its best descriptor is that it defines the Lost Generation, aimlessly wandering the world, purposeless. Its plot, its major themes, its point are all wrapped up in this strange new time that Hemingway found himself a part of. It’s a reflection of the world at that time, the world Hemingway knew.

And if you are aware of this when you’re reading it, if you have taken the time to appreciate it, then the book is a page turner, a fascinating tale from start to end. It’s a brilliant example of why Hemingway remains a figurehead in the literary world and why his books still do get taken off the shelves by the English teachers for that one month of the year.

Which brings me back to my first point about Hemingway and the 21st century. The Sun Also Rises was the first true financial success for Hemingway as far as writing was concerned. People read it and they read it again. So it was clearly popular in its day.

But styles change. And the style of Hemingway is no longer the most popular style of the day. This does not make it bad. Au contraire, just because most people buy $3.99 Cabernet Sauvignon from the supermarket does not mean the 1996 bottle of Château Lynch-Bages Pauillac Grand Cru in the cellar is any less good.

Arguably just the opposite in fact.

Hemingway is not for everyone (and neither is the $100 plus bottle of wine), but for those willing to learn his writing style and take the time to explore his life a little, I would argue that his books, especially The Sun Also Rises, offer a level of enjoyment seldom found in most reading today.

Enjoying this man and his work takes time. And if that doesn’t interest you, then don’t read this book (For Whom The Bell Tolls is slightly different). Nobody will mind. Nobody is judging you for not liking a certain author.

But there is a genius to Hemingway’s writing that others have tried to emulate for years, and it’s a genius often missed in our hurried, nine-to-five lives.
*