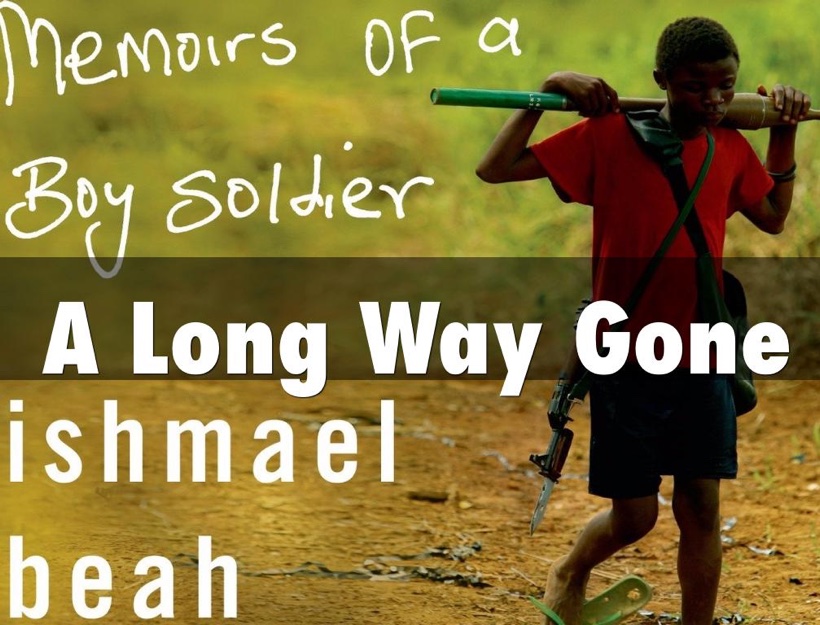 A Long Way Gone: Memoirs of a Boy Soldier is a heart-wrenching true story about the author’s (Ishmael Beah) experience as a child soldier. It is a story that so many of us are unfamiliar with, that so many of us will never learn about without books such as this. And yet, at the time of the book’s release, there were estimated over 300,000 child soldiers. Over 300,000 children living a life not dissimilar to Ishmael’s.

A Long Way Gone. The Importance of Storytelling

Before jumping into the contents of the story, it is probably best to start by saying that Ishmael Beah is an incredible storyteller. His childhood was one of joy turned to violence. His memories – it is clear from the book – are painful, his nightmares vivid. To turn a life such as this into a story is not an easy task. Ishmael balances well the facts of what happened with the emotion of how he dealt with it, all the while weaving the events into a single, coherent story.

He writes with incredible care, drawing the reader not only into the external conflicts of the war he was part of, but into the internal conflicts going through his mind. As he runs from the violence, a child of only twelve, the reader chooses with him as he decides where to go. Then, as his choices get made for him, Ishmael’s talented writing allows the reader to see what life is like for a young boy being turned into a killer.

How Can I Understand?

It is a story of understanding, a story that highlights the importance of storytelling. Without storytellers like Ishmael, we cannot hope to understand the lives of others.

This is perhaps illustrated most beautifully at the start of the story. There is a striking conversation between Ishmael and his friends at high school in New York. It serves as a prequel of sorts to the story and takes place chronologically after he has managed to escape the violence and create a new life for himself in New York. The conversation itself is only a few lines long but it is a powerful reminder that for those of us whose lives have been relatively comfortable it is impossible to understand the intensity of violence, what it is like to have to flee. It also hints at some of the unspoken challenges that a child of war might have when integrating into life in America.

The book was released in 2008. Ishmael’s experience of the conflict happened in the 1990s. And yet, reading it now I am still reminded of how little we know of each other’s lives, how little we seek to understand the lives of those around us. Ishmael’s war may have taken place in the 1990s, but there are many wars still taking place around the world. There are many refugees running for their lives, many people whose stories mirror Ishmael’s. Will we ever hear their stories?

From a writing point of view, one of the captivating things about A Long Way Gone is that no word is written unnecessarily. At times you feel breathless simply reading the story, wishing for a resting point where you can put the book down and take in what you’re reading. But that’s not really how life works when you are fighting to survive.

“I had passed through burnt villages where dead bodies of men, women, and children of all ages were scattered like leaves on the ground after a storm. Their eyes still showed fear, as if death hadn’t freed them from the madness that continued to unfold.”

That was taken from chapter eight of A Long Way Gone. I opened the book and picked a random page. The intensity of this story does not ease. And yet throughout this whole story it is clear that Ishmael is still just a child – he’s twelve when it all began for him – and you can see that in the way he thinks. He doesn’t become a soldier until later in the story, but when he does he is still a kid. He watches war films like Rambo and, like the rest of us, he gets sucked into them. Unfortunately, he then lives those movies. They were used as fuel for their fighting energy – along with copious amounts of marijuana and a mixture of cocaine and gunpowder.

There is a very eye-opening scene – I won’t give too much away – when one of Ishmael’s friends tries to pull off a move he saw from one of those war films. Where I live they are simple entertainment, but for that boy they were tactical.

Coming Back to the Importance of Storytelling

The last thing I wish to say about this book is something that Ishmael Beah said during his first reading of the story in New York. When people were reluctant to ask questions after the reading ended, he said, “It is only by asking honest, difficult and thoughtful questions that we can all begin to understand what war does to the human spirit.”

That is, as I understand it, what this book is. It is answering the difficult and dangerous question: “Will you tell me your story?”
*