Memorial on a Sidewalk

I had never participated in a memorial marking the anniversary of someone’s death that is held on a busy street-side. Last month I did. Cars were parked in a ring on the street so that those inside the ring and on the sidewalk could talk, listen to music, eat some food and find strength and comfort in being together. I experienced the gathering as both profound and tragic. Tragic because a young father was senselessly killed by police. Tragic because of his dying in fear, suffering from mental anguish, and because he was killed in the presence of his family. Profound because of the strength of grace and dignity that ran through those gathered, even as they remembered the pain of what happened and the loss they still carry. Profound in sharing in a sense of community, community coming together to remember, to honor, and to comfort one another and also to say, “never again”.

One of the first things that happened after a chair had been set up on the sidewalk for a petite grandmother in the midst of her family was an activist offered her a plate of hot food that had been provided. 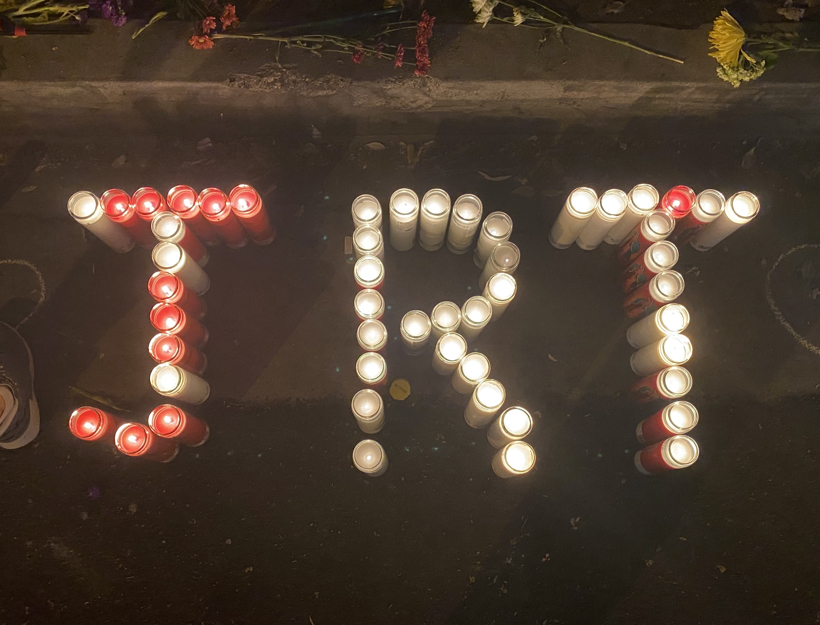 There have been two street-side memorials in Pasadena recently

One was on August 15th and the other was on September 30th. The first was held in Northwest Pasadena across from La Pintoresca Park just up from Washington Blvd. and the second was held on East Orange Grove Blvd. in-between the intersections of North Marengo Ave. and Garfield Ave.

I had spent some time in the East Orange Grove area before, during the summer of 2020. As the sky darkened one evening, it was pierced with bright white and red flashing lights as an intersection for blocks around was surrounded by police. There were Black Lives Matter protesters walking, chanting, and carrying signs between the Pasadena Police station and La Pintoresca Park. I was there to pick up a friend who was participating in the protest. There was an extremely uneasy feeling in the air. Not because of the walking or the protest, but because the police presented themselves in such a menacing way.

Both of these memorials in Pasadena were held for young black fathers killed by Pasadena Police. Anthony McClain was 32 years old when he was killed just over a year ago now on August 15, 2020 on Raymond Ave.  JR Thomas was 35 years old when he was beaten by police over five years ago on September 30, 2016 inside his girl friend’s apartment on East Orange Grove Blvd. His body was left in the open for more than 10 hours while his partner, children and neighbors dealt with the aftermath of a call for help to the authorities that had gone deadly wrong. According to the LA Times, “Thomas was repeatedly shocked with stun guns, battered with batons, and punched and kicked in the head….one officer said he hit Thomas with a “hammer fist” in the face twice so hard his hand broke.”  One of the neighbors in the apartment building told me at the memorial that they still think about what happened that night and that what happened continued to “affect everyone” living in that apartment building.

The story of JR Thomas

In the new documentary by local film-makers called Thorns on the Rose, the story of JR Thomas is presented in raw, intimate detail. As the coroners van finally pulls away carrying his body, a woman reaches out to the vehicle, hands outstretched in grief. It is a story that when learned leaves the heart sick from grief. One of the filmmakers, James Farr of Conversation.Live, wrote about the life of JR Thomas in a piece on the Pasadena Black Pages in October of 2016 and then hosted a talk on Conversation.Live about the tragedy just over a year ago. Here is the video of that conversation:

At the JR Thomas memorial, one of the activists invited the gathered school-aged kids to participate in some “chalk therapy”

As the kids grabbed the thick, colorful chalk, one little boy asked what he should draw with it. The activist replied, “I usually draw hearts – because love is most important.” That seemed to satisfy the child, and so he drew. JR Thomas was survived by eight children. 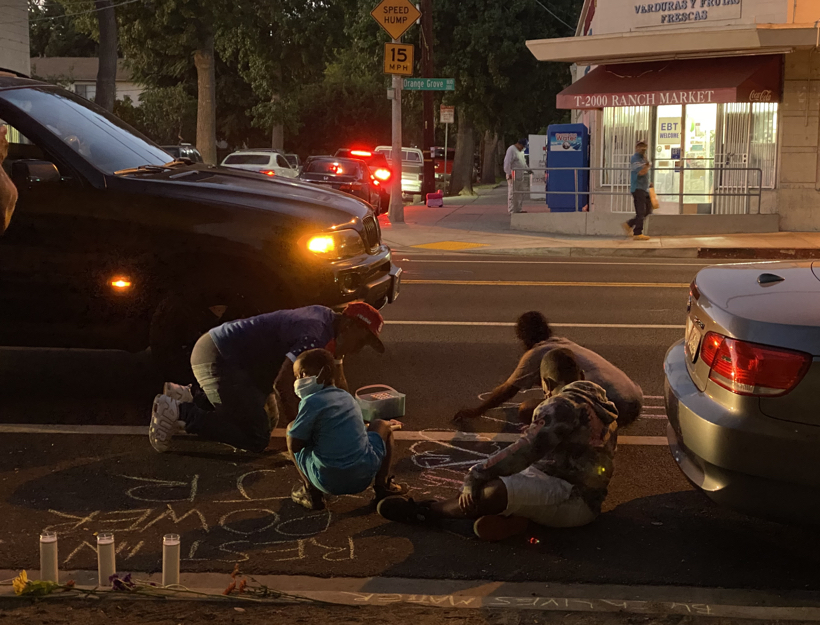 Anthony McClain was killed on August 15th, 2020, just months into massive demonstrations against police brutality and as calls for police reform erupted all over the country and even, indeed, the world. George Floyd had been killed by police on May 25, 2020 after an officer knelt on his neck for nearly 9 minutes, depriving him of his life on a city street in Minneapolis, Minnesota. Some of George’s last words, “I can’t breathe“, as well as desperate calls for his mom can be heard as his life ebbed away. If you have not watched the video of those last 9 minutes of Mr. Floyd’s life, although it is difficult to watch, it is important to not look away. Here is a news cast that also tells the story of what happened to George Floyd:

Anthony McClain was a passenger in a car, receiving a lift from a friend. He was wearing a white t-shirt, shorts and a large “MK” (Michael Kors) belt buckle. When asked to get out of the car by one of the police officers, Anthony started to run. He ran so fast he ran out of his shoes. He didn’t get far before one of the officers opened fire, shooting him twice in the back.  Anthony eventually stumbled and lay between the sidewalk and the street, bleeding into the grass. The grass was red from his blood for days afterwards even as a memorial grew up around the place where he lay. He was heard to say that he “couldn’t breathe“. Officers put him on his stomach with his hands behind his back to handcuff him as his life ebbed away. Anthony had three children and according to his sister O’Asha Bales, he was just beginning a new chapter in life, planning to start a clothing line.

Wishing that somehow it hadn’t all happened.  Wishing that I could put a soft blanket under his body the night he passed away and a pillow to cradle his head as he lay. Since I could only do that in my heart, I left this prayer on the street near to where he died. To quote the activist and musician Andre Henry, “It Doesn’t Have to Be This Way”. The question is, what will we do to make sure this doesn’t happen again?
* 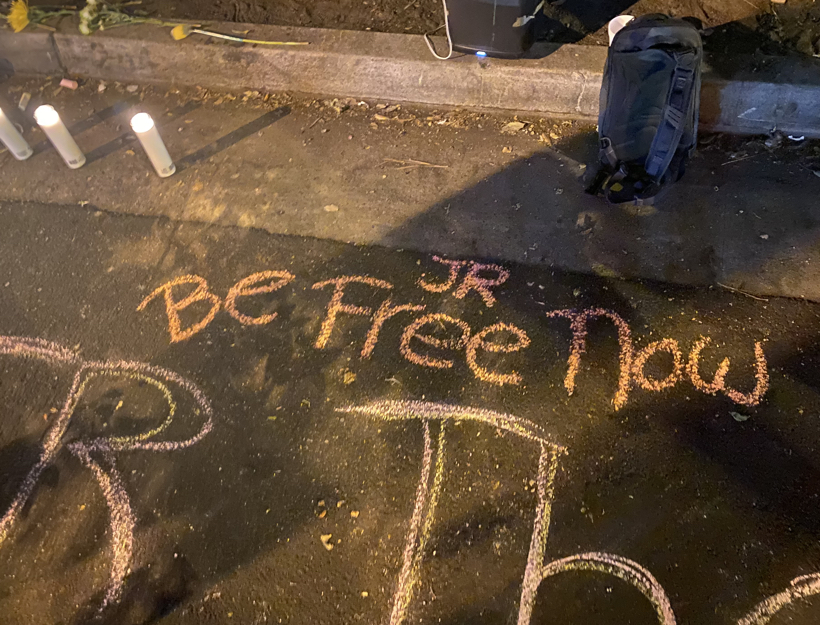 A Memorial for Pasadena’s JR Thomas