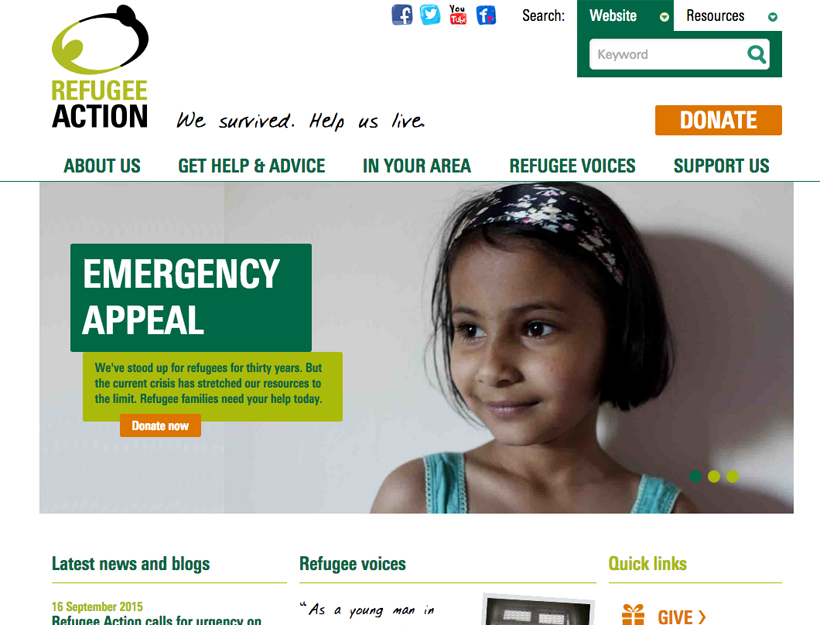 This isn’t specific to London, nor is it specific to Britain. To be honest, it isn’t actually specific to any European country, but it is specific to culture. In fact, it is very much about culture, mainly distressed and oppressed culture.

Whatever your beliefs about the current refugee situation in Syria, and whether or not you believe that those in trouble should or should not be allowed into Europe, I do hope we can all agree that the refugees coming to Europe are, in fact, humans and should be treated as such.

Because of this, and because this is an important part of what we do here at Culture Honey, I want to take this time to highlight an organisation that is attempting to do just that: treat those coming to Europe as humans.

So, without further ado, here’s Refugee Action. There are many organizations, and we all know a few that we lean towards: The Red Cross, Salvation Army, etc. I’ve chosen Refugee Action among the larger list for three reasons:

The second reason is probably the most crucial because this crisis isn’t exactly new. People throughout history have had to flee their homes for whatever reason, and there are refugees from all walks of life trying to find freedom and hope in all parts of the globe. So before we start talking about this ‘refugee crisis’ we should probably think about the universality of being a refugee and an immigrant.

So what does Refugee Action do?

Well, many things. They work in six areas in England, raising awareness and working directly with refugees to help with cultural and economic integration. They also lobby the government to focus more on the issues of refugees and work to improve the overall lives of those who’ve had to flee their homes.

In cities such as London, there is a strong link between homelessness and being a refugee. According to the Refugee Action website, approximately 40% of London’s rough sleepers are from outside Europe. This is another area within which this organization works; not only in prevention but also in helping those who are homeless to get back on their feet.

They also run programs specific to different kinds of refugees including those tailored towards youth and towards women seeking shelter. To find out all that they do, click here.

The refugee crisis that is happening now is incredibly complicated, and there are many factors to understanding it. That’s ok. We are all going to have slightly or strongly differing opinions on the solution to this issue. That’s also ok. But whether or not these folks fleeing their countries are human or not and whether or not they should be treated as such shouldn’t be difficult questions to answer.

Here at Culture Honey, we understand that there are multiple sides to every story, and issues like these are complex. Funnily enough, that’s part of what culture is. What we hope to do is sometimes ask some questions, sometimes get us thinking, and sometimes, most of the time, highlight the organisations that are working with those who are affected by these issues.

Whether I agree with my country’s decision on the refugee crisis or not shouldn’t really matter.
*