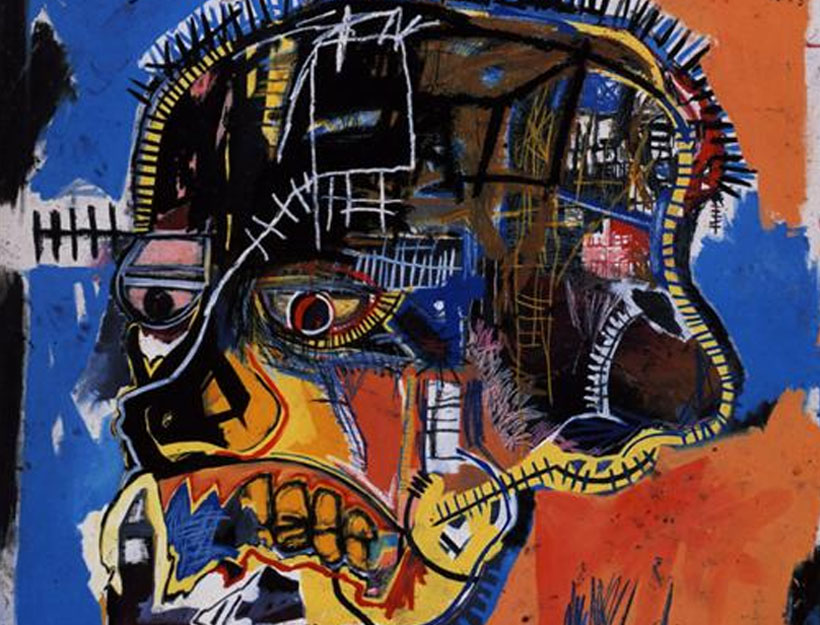 When I think of the early 1980’s, I think of a “gritty” time, but in terms of race relations in the U.S., somehow a hopeful time as well.  With all the grit and even anger being voiced by many, how did I feel it was a hopeful time? Let’s rewind a bit and see if I can explain.

Jean-Michel Basquiat’s art visually captures a sense of that time for me.  There was pain wrapped up in the art, but his “voice” was being amplified in our generation – which in its own way gave hope. What started as graffiti art on the streets of the Lower East Side of Manhattan soon graced the pages of Vogue and Vanity Fair magazines. Remember this was pre-internet! To ask what Basquiat art would be like today had he lived is an exercise in futility, I know, but experiencing such a strong, colorful voice through work like his makes one wishful.

It was a time for finding voices, and it seemed like many minority voices were being heard, and even were leading out – especially in pop culture. Punk Rock was (mostly) done raising its rebellious fist, Hip Hop was burgeoning, drug use and crime were up, but a feeling of “we’re all in this together” seemed to permeate Generation X, which I am a part of.  Pretty much every night David Letterman would have at least one joke about the rats in the subways of New York City. The American “War on Drugs” was being marketed with the “Just Say No” campaign spearheaded by first lady, Nancy Reagan. Saturday Night Live’s ethnically mixed cast was churning out social commentary and a little bit further into the decade the Fly Girls would be bumping on “In Living Color” and Arsenal Hall would offer a popular variety in late night entertainment.

But like I said, there was definitely grit in L.A., and all around the country as well.  Here is a song that for me takes me right back to that time. This one is from Cypress Hill out of South Gate, CA.  It might seem a surprising choice, but for me, coming into young adulthood in the L.A. area, this SOUND brings the time back:

I’ve addressed the time in-between then and now from my perspective in another article on Culture Honey entitled, “From Tracy Chapman to Barack Obama – What Has Changed? Race Relations in America 2016”. I hope you will have the time to read it and share your thoughts. But if we fast forward to now, a jazz artist that I am familiar with, Gregory Porter, has a line in his song, “Liquid Spirit”, that underscores something to me (italics mine):

“The people haven’t drank for so long, it might not even make mud.
Un re-route the rivers
Let the dammed water be
There’s some people down the way that’s thirsty
So let the liquid spirit free

There are many other voices today like Kendrick Lamar who expressing their vivid African-American experiences with music and creativity.  Check out the dramatic performance he gave during last week’s Grammy awards show.

Here’s a sample of lyrics from Kendrick Lamar’s “The Blacker The Berry” – what do you think?:

Been feeling this way since I was 16, came to my senses
You never liked us anyway, f*** your friendship, I meant it
I’m African-American, I’m African
I’m black as the moon, heritage of a small village
Pardon my residence
Came from the bottom of mankind
My hair is nappy, my d*** is big, my nose is round and wide
You hate me, don’t you?
You hate my people, your plan is to terminate my culture
You’re f***in’ evil I want you to recognize that I’m a proud monkey
You vandalize my perception but can’t take style from me
And this is more than confession
I mean I might press the button just so you know my discretion
I’m guardin’ my feelings, I know that you feel it
You sabotage my community, makin’ a killin’

And one last link before wrapping this up – did you see the L.A. Times front page this past Sunday, 2.21.16?  The Headline reads, “There have been more than 2,000 police shootings in six Southern California counties since 2004.  Only one officer was prosecuted.”  With the high profile cases of African Americans such as Trayvon Martin, in Sanford, Florida, Michael Brown in Ferguson, Missouri, Eric Garner in New York, Tamir Rice in Cleveland and Freddie Gray in Baltimore, the cries for justice are not only valid, but must be answered with change.  These are the cases that the general public has knowledge of, but the numbers prove there are countless others that are known only to the family and the local communities.

What is to be the response of citizens when these stories are being lived out each day? If faith is involved, what about the scripture from Isaiah 58:6 that reads:

“Is not this the fast that I choose:
to loose the bonds of injustice,
to undo the throngs of the yoke,
to let the oppressed go free,
and to break every yoke?”

So, let’s have a conversation. Let’s listen to each others’ stories. Let’s let the change begin in OUR friendships, relationships and communities. Black Lives Matter is a movement that has sprung up to give voice to the cry for justice in African American communities. Here is a recent article from a group of Muslim students in New Jersey who hosted an event where the Black Lives Matter movement was explained.

And speaking of those from a Muslim faith, don’t forget Culture Honey’s third discussion group will be coming up this Spring, and will focus on the topic of Refugees and Migrants and what the biblical text has to say on the subject.
*